Solidia Technologies Can Reduce the Carbon Footprint of Cement and Concrete in California by 7.4 Million Metric Tonnes 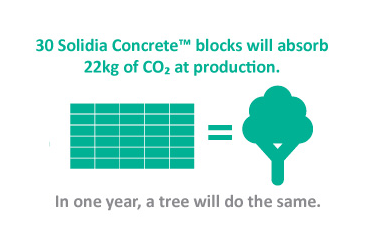 30 Solidia Concrete™ blocks will absorb 22kg of CO2 at production. In one year, a tree will do the same.

Solidia Technologies® Chief Commercial Officer Bo Boylan joined environmental leaders at a meeting of The California Air Resources Board (CARB) to discuss the impact of Solidia’s ecofriendly cement and concrete systems on California, including a 30% reduction in carbon emissions in the production of cement. Coupled with the capture of another 240 kg of carbon dioxide (CO2) during cement curing, Solidia’s processes can reduce the carbon footprint of cement and concrete in the state by 70%.

“In California alone, our technologies would result in a reduction of more than four million metric tonnes of carbon emissions at cement kilns,” said Dr. Boylan. “By curing concrete with CO2 instead of water, we can also safely and permanently sequester 3.4 metric tonnes of CO2 in concrete products and save Californians 27 billion gallons of water each year.”

Easy to adopt anywhere in the world, Solidia’s systems produce a sustainable cement and cure concrete with CO2 instead of water, while utilizing manufacturers’ existing infrastructure, raw materials, formulations, production methods and specifications. Stronger, more durable and higher performing than traditional concrete, Solidia Concrete™ products cost less to produce, reduce water and energy use, and cure in less than 24 hours.

"We applaud CARB for its commitment to environmental design through its Green Building effort,” explained Dr. Boylan. “That innovative mindset is a primary incentive for us to target California, which makes up the sixth largest economy in the world and is the second largest producer and consumer of cement in the country. Our technology has the potential to make a huge impact both environmentally and as an engine for economic growth as we give cement and concrete manufacturers a massive competitive edge.”

About The California Air Resources Board (CARB)
The California Air Resources Board (CARB) is charged with protecting the public from the harmful effects of air pollution and developing programs and actions to fight climate change. From requirements for clean cars and fuels to adopting innovative solutions to reduce greenhouse gas emissions, California has pioneered a range of effective approaches that have set the standard for effective air and climate programs for the nation, and the world.