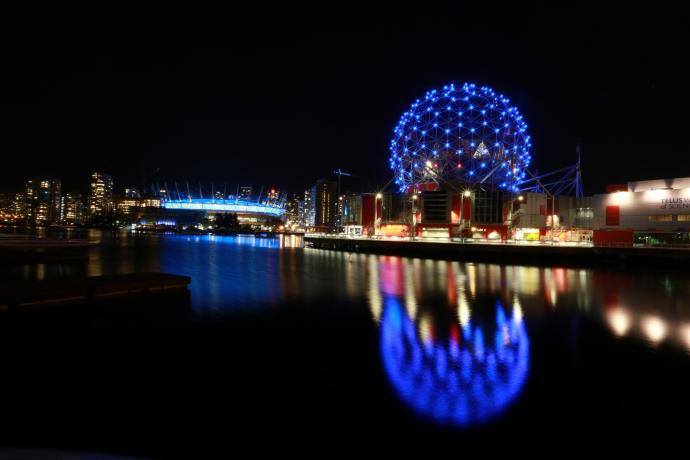 On March 14th, notable Vancouver buildings and landmarks will glow blue in support of protecting our oceans, which is being showcased at GLOBE Forum 2018 (March 14-16) - North America's largest and longest-running Leadership Summit on Sustainable Business.

This unique initiative complements a number of special sessions and programs at GLOBE Forum, which explore the role business, government and civil society can play to protect our oceans and include:

To tackle the global crisis of ocean plastic, Ocean Wise® today launched the #BePlasticWise pledge to reduce disposable plastic use at GLOBE Forum. The #BePlasticWise pledge asks people to commit to monthly challenges to replace their use of single-use plastic items - such as plastic straws, bags, cutlery, food packaging and water bottles  - with ocean-friendly alternatives. Sign the pledge at ocean.org/pledge.

"In many ways, Canada and Canadians have been defined by our relationship with the ocean, and with our lakes and rivers. We are proud that these Vancouver landmarks and buildings are literally shining a light on the plight of our oceans, and reminding us that we need to protect what we love."

“Ocean Wise® is tackling the global crisis of plastic waste in our ocean to reduce the amount entering our ocean. More than ever, our ocean needs the help of individuals, businesses and government to do their part in reducing single-use plastic waste. Join us in this effort by taking a pledge to break your pattern and protect our ocean at ocean.org/pledge.”

“We are honoured to be able to support this critically important message by illuminating Science World’s dome in blue on March 14th. It’s inspiring to see the community come together in an effort to educate and protect our planet’s oceans, and essential to ensuring that the next generation can enjoy one of our world’s greatest natural wonders.”

GLOBE Series is a Canadian-based convener of events that educate, empower, and connect leaders in pursuit of a cleaner, more prosperous world. Since 1990, our events have brought together over 170,000 participants from business, government and civil society across 97 countries. Our flagship event is GLOBE Forum, North America's largest and longest-running Leadership Summit for Sustainable Business, which takes place in Vancouver every two years. For more information visit www.globeseries.com, follow us on Twitter @GLOBE_Series

For the past 25 years, GLOBE Series has served as the nexus for global networking and leadership on the business of the environment. We’re about ‘Business Innovation for the Planet’ and thinking outside the box. GLOBE Series helps thousands of leaders devise winning strategies to spearhead their sectors while conserving resources, igniting innovation, and fueling ideas to help increase resiliency and reduce risk. GLOBE Series is proud to produce two biennial award-winning events: GLOBE Forum and GLOBE Capital.

Watch the video to learn more about the GLOBE Forum event.

GLOBE Capital is where leaders discuss how to mobilize and accelerate the capital necessary to transform our economy. Goals of this conference are to attract both innovation and new pools of capital to fund advanced, low-carbon infrastructure while mitigating investment risk and enhancing returns.

Watch the video to learn more about the GLOBE Capital event.

Join us at GLOBE Capital, Spring 2019