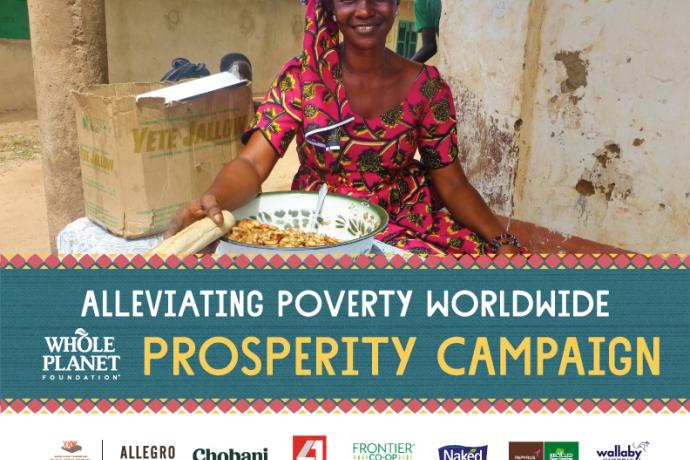 On March 1, Whole Planet Foundation launches its Annual Prosperity Campaign to alleviate poverty around the globe for the world’s poorest people – mostly women – living in communities where Whole Foods Market® sources products. This year’s campaign goal is to raise $3 million to increase the foundation’s current reach of 72 countries and 16 U.S. cities.

“Shopper generosity during the Annual Prosperity Campaign is tremendous. Whole Foods Market customers are part of a global movement of empowering women to change their own lives through their own hard work,” said Joy Stoddard, Whole Planet Foundation development and outreach director. “A loan as small as $11 can shift a women’s self-perception and power her potential to see her own value, have the courage to become a businesswoman and generate income for herself and her family. This campaign enables us all to contribute.”  Because Whole Foods Market covers the foundation’s operational costs, 100 percent of every donation benefits microcredit clients.

The average first loan size supported by Whole Planet Foundation is $183 and the loans do not require a formal contract or collateral.  In some parts of the world where women are often marginalized with little say in decisions, these small loans make a mighty impact.  Microcredits cannot guarantee that a woman will escape poverty herself, but they provide a chance for her to become a participant in her community’s economy, improve her family’s living conditions, and increase nutrition and education for her children.

For example, Maimuna is a microcredit client of Whole Planet Foundation’s microfinance partner Reliance in The Gambia in West Africa. Maimuna sells bread, dried fish and breakfast items in the village of Nyimina Dankunku where she lives with her family. With her loan of 5,000 Gambian Dalasis (about $117), Maimuna purchased ingredients for the food she prepares. On a good day, she can take home a profit of 300 Gambian Dalasis (about $6).  Microentrepreneurs in the United States run businesses including food carts, flower stands, artisan goods, mobile nail salons, and jewelry, shoes and clothing sales.

“Since 2006 we have funded 2.6 million microloans providing 14.5 million opportunities for a better life. The microfinance organizations we partner with are experts in poverty alleviation and we are seeing reductions in global poverty,” said Philip Sansone, Whole Planet Foundation president and executive director. “We couldn’t do this work without our generous supplier partners who have donated a remarkable ten million dollars for these critical efforts.”

Learn more about the transformative power of microcredit at Whole Planet Foundation, watch the documentary Living On One Dollar to understand extreme poverty, and join the Prosperity Campaign in Whole Foods Market stores or online to power the potential of women entrepreneurs worldwiide.