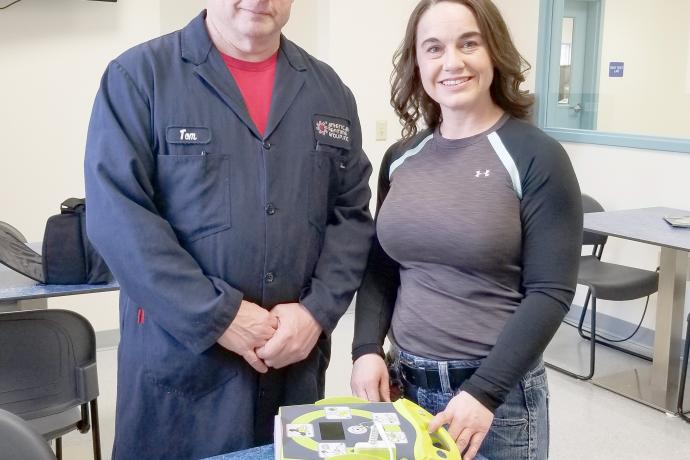 On a Monday morning in August ARG’s plant radio crackled to life, sounding the call, “Man down.”

But let’s go back to the beginning …

Tom Rook is the kind of guy who gets up and goes to work. Simple as that. In 35 years, he has been out sick three times – those on consecutive days and due to, knowing Tom, what must have been the worst stomach virus in history.

So Aug. 14, despite feeling unusually lightheaded, when he grabbed his coffee and jumped in the car for his commute from Kane to Bradford, he did so without the slightest inkling the decision would, quite literally, save his life.

Tom arrived a short time later at his job as senior specialist with ARG’s quality lab knowing only that he just didn’t feel like his usual self. Preparations for the day included some discussion with fellow lab technician John Landes and their supervisor Chris Manning. The conversation finished, they dispersed to set about their work.

“I don’t know what made me turn around,” Manning said.

“But I turned around, and saw Tom just fall … and hit his head off of a drawer handle. I went over to him and got down there with him,” Manning recalled. “He was breathing, but he was just gasping for air and his body was tense. I was trying to just talk to him … keep him with us.”

Manning’s next move set in motion the brief but intense chain of events that would accomplish exactly that.

Anyone who has played golf knows how frustrating that particular game can be. But the weather was fine – in the mid-70s and dry – for Tom to enjoy a Sunday round with his son, Jeff, at Kane Country Club just hours before this story would begin to unfold.

Not playing as well as he’d hoped and distracted, perhaps, by the prospect of starting another workweek, Jeff was feeling that irritation familiar to virtually anyone who has ever played golf. A naturally upbeat and optimistic person even then, Tom took the opportunity to impart some fatherly wisdom.

“I just told him not to worry about it,” Tom remembered. “I said, ‘Every day is good no matter what you’re doing. Every day is a good day.”

“I immediately grabbed the radio and called that we had a man down in the lab,” Manning continued. “Within seconds our Emergency Response Team was there.”

From one end to the other, ARG’s refinery spans literal miles. Safety professional Kitzie Pingie spends almost no time at a desk, being deployed throughout the day to any and all points within the facility. So the odds of her being right next door to the lab in an office were, it’s safe to say, rather slim. Yet, that’s exactly where she was when the call came through.

ARG Emergency Response Specialist Matt Rettger, who came to ARG with more than 25 years of experience in the field (the bulk of which were spent as a paramedic with the Bradford City Fire Department), was thankfully also nearby and arrived quickly to assess the situation. Pingie, a certified EMT and American Heart Association-certified instructor of CPR, AED and First Aid, was already there and performing chest compressions.

Manning described it as, “Chaotic and scary. Very scary. I was just hoping and praying that he was going to be OK.”

It was a scene where a head wound that would require five staples to be closed was very much a secondary concern.

Not long before Tom started working at the quality lab in August 2008, ARG added a couple of automated external defibrillators (AEDs) to its arsenal of safety equipment. While the company has always been safety-conscious due to the potential dangers inherent to an oil refinery, ARG has doubled down in recent years with an even more concerted effort to improve facility and employee safety. Among many other investments, the company purchased (at an initial overall cost of approximately $2,000 each) additional defibrillators to bring the total number of AEDs on site to nine. Plans are in place to purchase at least two more in 2018. According to the American Red Cross, it would be ideal if all Americans were within four minutes of an AED and someone trained to use it.

Rettger concluded, “I don’t like the way this looks. Get the AED on him.” ERT members at the scene proceeded to cut away Tom’s shirt while Pingie retrieved and prepared the AED for use. Having powered it on, she placed the device’s electrodes on Tom’s chest and allowed it to evaluate his heartbeat; in this case, the lack thereof as Pingie had already established that he had no pulse. The device advised defibrillation – the electrical shock that stops cardiac arrhythmia – and Pingie pressed the button.

Less than one minute later and fewer than 90 seconds after Manning had called for help, Tom woke up. It was just inside of only three minutes before the Bradford City Fire Department had arrived.

“Tom was in cardiac arrest, meaning his heart was not functioning at a capacity to sustain life,” Rettger explained. “We went from that state, to him being able to stand up under his own power less than five minutes later to get on the ambulance cot. It’s unheard of.

“I’ve seen it before when things like this happen; the patient will go back into cardiac arrest … and he didn’t. In all my years in this field, I’ve never seen anything like it.”

Tom, at 52, had never before experienced heart problems. Testing after the incident revealed Tom’s heart had no buildup or blockages of any kind. His doctors are still not entirely sure what caused the arrhythmia, but stated they could tell him with certainty that if he had not been at work and the ERT not responded as it did, the morning would have reached a much different conclusion.

“They told me that if my coworkers hadn’t reacted the way they did, I definitely would not be here. If I had been at home, my wife (Julie) would’ve found me dead in the kitchen.”

Manning added, “I was so impressed with our ERT, how quickly they responded and how well they were able to deploy their training. There were guys up in man-lifts welding out in the refinery who were down, in a truck and at the lab in what seemed like seconds. It was pretty amazing.”

He soon underwent surgery for an implantable cardioverter defibrillator (ICD), which can attempt to correct the rhythm of Tom’s heartbeat and, if necessary, deliver a correcting electrical impulse. He admitted that while it feels strange, it is somewhat comforting to have that protection in place.

“The doctor told me I have no restrictions – just don’t be lifting any refrigerators.”

As soon as he was able, Tom paid a visit to ARG.

“What do you say to someone who saves your life? Besides, ‘Thank you’?” My goodness … you can’t repay that,” he said.

So while he was not sure how he “would ever repay everybody,” some heartfelt Christmas gifts seemed like a nice start. Tom’s humble offerings were received with appreciation and the unanimous sentiment that simply having Tom back at work was what everybody valued most of all.

“Hearing his voice was the greatest gift I could have been given,” Manning said, “to hear him say he was coming home.”

“Kitzie was a little uncomfortable with my thank-yous,” Tom said. “She said the AED is what saved my life and she was just trying to help. I said, ‘Kitzie. That’s what makes you special.’”

Tom pointed out that in cases of cardiac arrest, the survival rate is less than 5 percent because people aren’t where they can get help.

“It was a miracle. Somebody was watching out for me that day,” he said, adding rhetorically, “Not seeing my sons (Jeff and Jamie) graduate from college?

“It changes your whole outlook on life. Everything slows down for you, you don’t really worry about stuff so much anymore. It just puts everything in perspective … and not just for me, but for my family and everybody,” he continued. “Kitzie doesn’t know them, but she has a whole big family who loves her.”

Our unique facility is situated on approximately 131 acres in Bradford, Pennsylvania, the heart of McKean County and the birthplace of the U.S. domestic oil industry more than 100 years ago. Our refinery has a rated capacity of 11,000 barrels per day and processes light sweet paraffinic crude. This type of crude is available domestically, and ARG purchases the majority of its crude from sources in Pennsylvania, Ohio, New York and West Virginia. ARG stocks are converted into high-quality waxes, lubricant base oils, gasoline and fuels, as well as a wide variety of specialty products. American Refining Group’s state-of-the-art blending and packaging facilities are capable of producing a full spectrum of finished lubricant products. These products are available in a broad range of package sizes, including bulk, and can be delivered either by rail or truck. Our total commitment to quality is proven through our packaging plant and refinery being both ISO 9001:2008 and Made in USA certified.