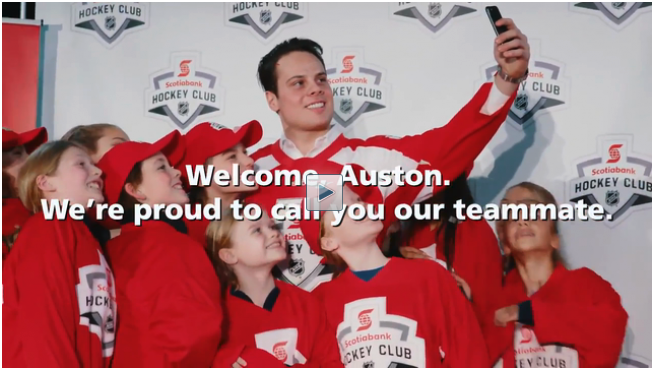 Auston Matthews of the Toronto Maple Leafs has joined the Scotiabank team.

"I'm excited about the chance to join Scotiabank's team and the other great players who work to do so much to support kids on and off the ice," said Auston Matthews of the Toronto Maple Leafs. "I am proud to be associated with an organization that has helped give more than one million children the opportunity to play the game of hockey and I look forward to working closely with Scotiabank to provide other kids with some of the same opportunities that the game has given me."

Matthews was announced recently as a Scotiabank Teammate at the MLSE LaunchPad in downtown Toronto, in front of two Scotiabank sponsored kids' community hockey teams – the Toronto Titans AAA Peewee team and the Etobicoke Dolphins AA Peewee team. All players participated in a Draft Combine, including a series of physical challenges, with both teams being drafted onto the Scotiabank Hockey Club, before being surprised by the Bank's newest Teammate, number 34 and the first overall selection of the 2016 NHL draft, Auston Matthews. Two young hockey players presented Matthews' with his jersey to symbolize him joining the Scotiabank team.

Matthews also surprised the young hockey players in attendance by announcing that Scotiabank is giving them all tickets to attend the Toronto Maple Leafs' Next Century Game presented by Scotiabank, on December 19.

"We are thrilled to welcome Auston Matthews to the Scotiabank team," said Clinton Braganza, the Bank's Senior Vice President of Canadian Banking Marketing. "He is someone that young players admire and who shares Scotiabank's values. Auston grew up playing community hockey, just like the one million kids … and counting, that Scotiabank has helped to support since 2008. He is a role model and we know that he will be a great ambassador as Scotiabank aims to bring more hockey dreams to life for young people across the country."

In his role as Scotiabank Teammate and ambassador, Matthews will:

This news follows the August announcement where Scotiabank and Maple Leafs Sports and Entertainment (MLSE) shared their expanded sponsorship and philanthropic partnership which will see the home of the Toronto Maple Leafs and Toronto Raptors transformed into the Scotiabank Arena in July, 2018. The announcement is an extension of Scotiabank's love of the game of hockey and its commitment to helping young people reach their infinite potential. The partnership will enhance that support in the Greater Toronto Area and help expand community hockey programs for young people across the country.

The deal between Scotiabank and Matthews was brokered by CAA Sports on behalf of its client.