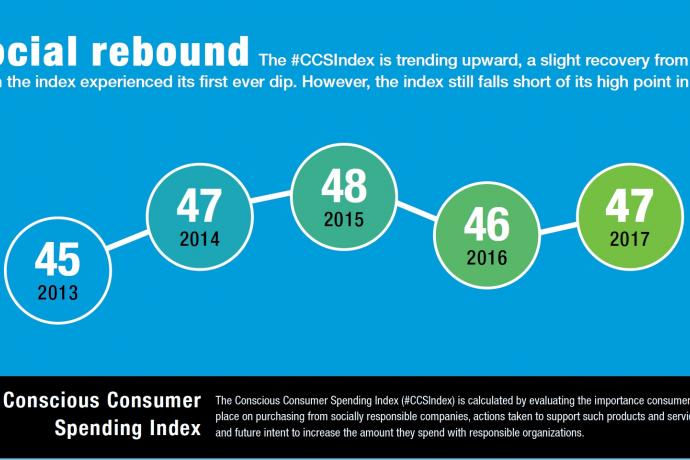 Nearly half of Americans (47%) believe the world is becoming a worse place to live, according to the fifth annual Conscious Consumer Spending Index (#CCSIndex). In total, 1,019 Americans were polled this year for the ongoing benchmarking study, which is conducted by Good.Must.Grow. (GmG), a socially responsible marketing consultancy.

The 2017 study found that Americans’ outlook on the state of the world has an impact on their socially responsible actions. Those with a negative outlook were less likely to purchase products from social enterprises or “do good” companies, less likely to donate time and money to nonprofits and less likely to report being green in the past year.

“I remain incredibly excited about the state of socially responsible spending in this country, but we do need address the obstacles of awareness and apathy that are momentarily slowing our opportunities for growth in this area,” said Heath Shackleford, founder of Good.Must.Grow. “We’ve endured a lot as a society this year: political unrest, natural disasters and unspeakable tragedies. It’s more important than ever for business to be a force for good. Fortunately, we see the demand from consumers. We feel the energy. Good is continuing to grow. We just need to continue feeding the movement.”

Despite the prevailing pessimism among Americans, the 2017 #CCSIndex showed a slight rebound from 46 to 47 on a 100-point scale after experiencing the first drop in its history in 2016. The #CCSIndex score is calculated by evaluating the importance consumers place on purchasing from socially responsible companies, actions taken to support such products and services, and future intent to increase the amount they spend with responsible organizations.

“It is encouraging to see an uptick versus a dip, but there’s still work to be done,” said Shackleford. “There is a core group of consumers who have raised their hands but not yet taken action. We have to figure out how to shift them out of neutral if we want to drive the level of change that is required.”

In addition to the core benchmarking study, this year’s #CCSIndex also featured a separate analysis of the top 50 DMAs across the United States. A sampling of 5,096 Americans was used to identify the country’s most socially responsible big cities. The study analyzed responses to a battery of questions focused on purchasing habits, nonprofit giving and environmental practices.

Charlotte came out on top as America’s most socially responsible city. Long Beach, Oakland, Virginia Beach and Seattle rounded out the top five. In specific categories, Long Beach ranked highest for earth friendly practices and had the most conscious consumers, while Virginia Beach was the nation’s most charitable big city. Charlotte’s second place finish in all three categories propelled it to the top spot overall.

This year marked the #CCSIndex’s third annual top 20 “Good Company” poll, compiled by responses to the question, “What company or organization do you think of first when you think of socially responsible companies/organizations?” Based on unaided recall by respondents, organizations were ranked based on how frequently they were named.

For the first time in three years, TOMS was not the top vote getter, falling to number seven. The American Red Cross headlines this year’s rankings. Walmart surged to number two, while Amazon climbed nine spots to crack the top ten, after entering the poll at number in 2016. For the third-straight year, almost one-third of respondents (30%) failed to name a socially responsible organization.

This study was conducted in partnership with Supportive Research Solutions and What They Think Research. Sampling was provided by Research Now. Data was collected Oct 4–12, 2017. In total, 1,019 Americans were surveyed for the annual index comparisons (margin of error is +/-3%). An additional 5,096 surveys were fielded across the top-50 DMAs for the first annual top 50 socially responsible cities analysis. For more information on the Conscious Consumer Spending Index, please visit www.goodmustgrow.com/ccsindex

Good.Must.Grow. provides strategic marketing support for socially responsible businesses, nonprofit causes and organizations that are focused on health + wellness. We want to be part of a revolution that drives societal change by sparking increased charitable giving and community involvement as well as unprecedented levels of corporate social responsibility. Proud to be a Certified B Corp. See how we’re #GrowingGood at http://www.goodmustgrow.com.