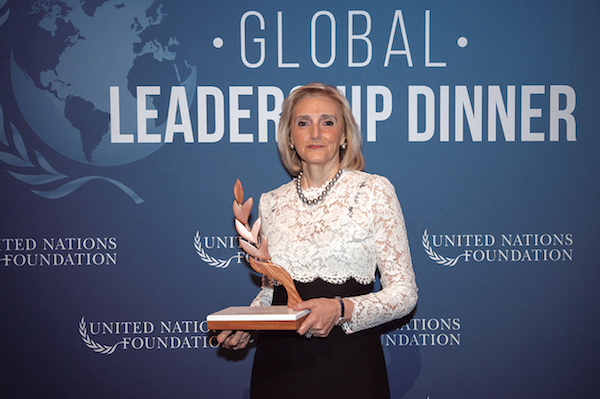 Since the beginning of the year, the world’s businesses and governments have been rallying to meet the United Nations Sustainable Development Goals (SDGs), also known as the Global Goals.

Launched to great fanfare as a set of 17 global ambitions, the Goals offer the world a useful ‘to do’ list for the planet. Fix everything on the list by 2030, and all will be okay in the world. At least, that’s the theory.

In reality, the challenge is much more tough and complex. To end global poverty (SDG No.1), for example, will mean reducing to zero the number of people living on less than $1.25 a day. According to the World Bank, that number is currently 1.2 billion people, or 16% of the world’s total population.

But the Goals are hugely important, particularly for a company like Walgreens Boots Alliance whose retail business brands include Walgreens, one of the largest drugstore store chains in the US, and Boots, the UK’s leading pharmacy-led health and beauty retailer. The company believes it has plenty of opportunity to create positive change in the world.

If the Goals are, for the first time ever, a definitive plan to transform our world in the next 15 years – fixing inequality, bringing people out of poverty and dealing with climate change once and for all – then aligning with them makes sense for Walgreens Boots Alliance. And that is exactly what the company has done, making sure that its own strategies, targets and policies are aligned with the global priorities as established by the UN SDGs.

So, each WBA corporate social responsibility (CSR) goal has been mapped to one or multiple SDGs, enabling the business to more effectively measure progress and report its findings. Via a process of understanding how the Goals relate to and interconnect with the business and its outreach in communities around the world, the company took the decision to address as many of them as possible, focusing on the areas where it can have the biggest impact.

“We recognise that the 17 SDGs are interconnected and, with multiple strands of activities throughout our lines of business, we can make a significant and meaningful contribution to end poverty, hunger and inequality, take action on climate change and the environment, improve access to health and education, build strong institutions and partnerships, and more,” Richard Ellis, Vice President Corporate Social Responsibility says.

Well, the focus on championing the rights of everybody being healthy comes in the form of supporting health and wellbeing programs delivered by a range of partners.

Walgreens has teamed up with consumer goods company Unilever and ME to WE for a project known as Give H2OPE to others (#GiveH2OPE). When customers buy specific Unilever products at Walgreens stores in the US, that translates into a donation that goes towards providing developing communities across Africa with better access to clean water, with on-the-ground social enterprise ME to WE making sure the money is spent effectively. This year, the aim is to provide the Kenyan village of Esinoni with access to clean water through the construction of a borehole, a 200-meter deep well.

Then, as one of the world’s biggest buyers of prescription drugs and other health and wellbeing products, the company believes it can use its knowledge and influence to combine strategically relevant activities with those that offer an environmental or social purpose. “It’s possible to make a sustainable business and show our investors that we are a profitable company at the same time,” says Ornella Barra, the company’s Co-Chief Operating Officer. Both the Get a Shot. Give a Shot. and Vitamin Angels campaigns are good examples of what she means.

Similarly, Walgreens donates 1% of sales of participating vitamin products to a non-profit called Vitamin Angels, which works to get children much-needed vitamins. According to the World Health Organization, malnutrition is the root cause of around 45% of all childhood deaths. So far, the initiative has seen Walgreens help to provide vitamins to more than100 million children and pregnant women in countries across the world.

In support of UN SDG No.13 (take urgent action to combat climate change and its impacts), the company has worked hard to reduce its carbon footprint. The company has committed to cutting its energy use by 20% from fiscal 2011 to 2020 across 100 million square feet of real estate in the US.

In the UK, Boots UK committed to a Mayday target of reducing CO2 emissions by 30 percent between 2005 and 2020, on a comparable basis,  following a 2007 challenge by His Royal Highness The Prince of Wales. As of 31 August 2016, the company was on track to reach this emissions reduction target at Boots stores that were open  in 2005.

Also, the Boots UK EnergyCare programme, which has also now been rolled out at the Walgreens support office in Deerfield, Illinois, has helped to encourage employees to think more consciously about how and when they use electricity.

Elsewhere, the Walgreens distribution center in Moreno Valley, California – a site that was sending an average of 22 metric tonnes of waste a month to landfill back in 2015 – has significantly cut its waste to landfill through an ambitious pilot project that is being expanded to other Walgreens sites.

With more than 385,000 people employed and over 13,200 stores in 11 countries, Walgreens Boots Alliance is a big business with an acknowledgement that it can have a hugely positive impact in the world – from the people it directly employs, to the suppliers from whom it sources goods, and the facilities and communities its products and services can help to support.

Through a range of initiatives, the company knows that it can slowly make a difference. But it also knows that its approach to CSR and its alignment with the UN SDGs is good for business too. “I feel a great responsibility to both my organisation and the global community,” adds Barra. “Working to achieve our mission from my role overseeing both business operations and our CSR programme provides me with insight into the strengths and intersections of these two functions. Now more than ever, I believe this is the role of a business leader in the 21st century.”

Since 1999 Ethical Performance has been working with and providing news to those who are responsible for leading CSR and sustainability practice and those who need to understand, learn and be influenced by that practice. Our network covers a wide range of industries and organisation types around the world.