The funding will meet critical needs for up to 1,000 military family members affected by the 2017 Hurricane Season 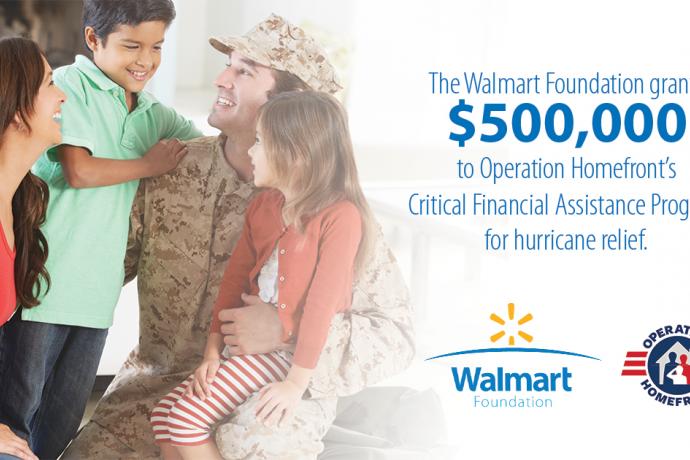 The Walmart Foundation is committing $500,000 to Operation Homefront’s Critical Financial Assistance program to help meet the unique and urgent needs of military families affected by the 2017 hurricane season.

The funding will support the financial needs of up to 1,000 requests from military family members struggling to make ends meet in the areas impacted by disaster, including hotel costs for those displaced from their homes, car repairs, utility bills, housing costs and groceries. In addition, the funding will help make up the difference in lost wages for members in the Reserve and National Guard who are called for active duty and must take leave of absence from jobs due to hurricane relief and rescue efforts.

“This year’s hurricane season has been particularly devastating. While hurricanes impact many of us, they can have a double impact on men and women in uniform, who serve a vital role in activating to support local communities affected by disaster, while also feeling the impact on their own families and homes,” said Julie Gehrki, vice president, programs for Walmart. “As a company committed to disaster relief, and a long-term partner of Operation Homefront, we share a commitment to build strong, stable and secure military families and are fully dedicated to assisting these families as they face financial hardships due to this year’s devastating hurricanes.”

The funding builds upon Walmart and the Walmart Foundation’s previously announced commitments totaling $35 million to support 2017 hurricane assistance in response to Hurricanes Harvey, Irma and Maria.

The Critical Financial Assistance program addresses financial crises for families of deployed and injured service members and is managed by Operation Homefront professional case workers who validate financial needs, offer assistance in the form of grants rather than loans and pay funds directly to service providers. The Walmart Foundation funding will support eligible participants, focusing on junior- and mid-grade enlisted service members (E1-E6) and all post-9/11 wounded, ill or injured service members with medical documentation on injury and discharged with honorable service within the past seven years. In addition, activated National Guard and Reserve members are considered active duty and are also eligible for the Critical Financial Assistance program.

“Walmart and the Walmart Foundation have been incredible partners for more than a decade,” said Brig Gen (ret) John I. Pray, Jr., president and CEO of Operation Homefront. “We are very grateful for their continuing commitment to helping us help our military families as well as their new support for our Critical Financial Assistance program. Since 2011, this vital program has fulfilled over 35,000 requests from veteran and military families, and the Walmart Foundation’s enthusiastic support will allow us to serve more military families, particularly those impacted by this year’s devastating hurricanes with the goal of helping them thrive in the communities they have worked so hard to protect.”

Walmart and the Walmart Foundation have a history of providing aid in times of disasters, helping communities prepare and recover by donating emergency supplies, such as food and water, home and personal products. Aside from the $35 million committed in response to this year’s hurricanes, Walmart and the Walmart Foundation have donated more than $60 million in cash and in-kind donations in response to disaster events since 2005.

In addition, Walmart and the Walmart Foundation have long supported military members, veterans and their families. As a long-term partner of Operation Homefront, Walmart and the Walmart Foundation have helped tens of thousands of military and veteran families through cumulative contributions of $6 million since 2006. Moreover, through its Military Family Promise, Walmart guarantees a job at a nearby store or club for all military personnel and military spouses employed by the company who move to a different part of the country because they or their spouse have been transferred by the U.S. military. Walmart also recently announced major changes to its military leave of absence policy, offering differential pay to associates for any military assignment, including voluntary service like basic training, allowing associates who are considering enlisting in the armed forces to do so without fear of losing wages.

About Walmart
Wal-Mart Stores, Inc. (NYSE: WMT) helps people around the world save money and live better - anytime and anywhere - in retail stores, online, and through their mobile devices.er 260 million customers and members visit our more than 11,600 stores under 59 banners in 28 countries and e-commerce websites in 11 countries. With fiscal year 2017 revenue of $485.9 billion, Walmart employs approximately 2.3 million associates worldwide. Walmart continues to be a leader in sustainability, corporate philanthropy and employment opportunity. Additional information about Walmart can be found by visiting http://corporate.walmart.com, on Facebook at http://facebook.com/walmart and on Twitter at http://twitter.com/walmart.

About Philanthropy at Walmart
By using our strengths to help others, Walmart and the Walmart Foundation create opportunities for people to live better every day. Walmart has stores in 28 countries, employing more than 2.3 million associates and doing business with thousands of suppliers who, in turn, employ millions of people. Our philanthropy helps people live better by supporting upward job mobility and economic development for the retail workforce; addressing hunger and making healthier, more sustainably-grown food a reality; and building strong communities where Walmart operates and inspiring our associates to give back. Whether it is helping to lead the fight against hunger in the United States with $2 billion in cash and in-kind donations or supporting Women’s Economic Empowerment through a series of grants totaling $10 million to the Women in Factories training program in Bangladesh, China, India and Central America, Walmart and the Walmart Foundation are not only working to tackle key social issues, we are also collaborating with others to inspire solutions for long-lasting systemic change. To learn more about Walmart’s giving, visit http://www.foundation.walmart.com.