Another 130 Employees and Contractors Left for Georgia on Wednesday 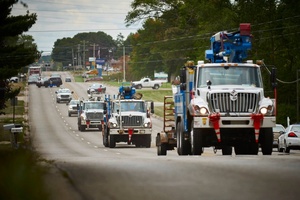 Crews are leaving from Jackson today to join over 220 Consumers Energy employees and contractors already in Florida’s Boca Raton area performing restoration work. The new contingent of lineworkers, damage assessors, supervisors, safety personnel and other field employees is expected to report to the Atlanta area by Friday and will be working for Georgia Power.

“We have all seen the images of utter devastation from Irma, and the reports we’re getting back from our colleagues already in Florida emphasize the need for more assistance in the region,” said Guy Packard, Consumers Energy vice president of electric operations. “We have been fortunate to receive assistance from out of state after severe weather in Michigan. Now it’s time for us to return the favor.”

Packard continued, “We made this decision after carefully analyzing our current workload in Michigan and reviewing the weather forecasts. We’re confident we can both meet our customers’ needs as well as help the millions of people affected by Hurricane Irma.”

Consumers Energy personnel are expected to remain in the state for up to two weeks, coordinating directly with Georgia Power.