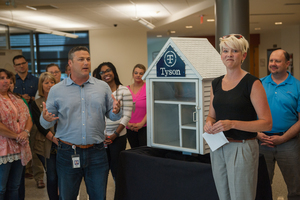 Jessica McClard, founder and operator of the Little Free Pantry has been named a Tyson Foods Meals that Matter® Hero.

McClard, a 42-year-old Arkansas native, is the fourth person honored as a Tyson Foods Meals that Matter® Hero – part of the company’s pledge to invest $50 million in cash and in-kind donations by 2020 to fight hunger, with a special focus on local initiatives.

McClard founded the Little Free Pantry (LFP) in May 2016, with the concept - leave what you can, take what you need. She saw community book exchanges known as a “little free library” in her neighborhood and thought the same concept could work for food. That inspiration led to Jessica’s first pantry pilot project, which launched in Fayetteville, Arkansas.

Since then, McClard and the organization’s dedicated supporters have installed new pantries across the United States and internationally, offering canned vegetables and proteins and other shelf stable products at no cost to recipients. The concept has been duplicated hundreds of times, under different names like the “Blessing Box,” “Community Food Box,” “Red Door Pantry” and many others.

The LFP concept is designed for neighbors to help neighbors. By staying grassroots, LFP empowers individuals and groups to respond immediately and specifically to local needs, feeding more people faster.

“I think people respond to it because it’s about community and neighborhood,” said McClard. “It just really seemed to me to have to do with a hyper-local action on behalf of the immediate neighborhood, which would raise the quality of life for one’s neighbors. And it’s been so gratifying to see the concept spread to communities around the world.”

To help LFP expand its efforts, Tyson awarded McClard $40,000 to implement a web-based mapping solution to make it more convenient for those in need to find a pantry close to them and create awareness of locations for those volunteering to stock the pantry. Tyson also pledged $10,000 of shelf-stable product to help stock pantries in northwest Arkansas. In addition, a new pantry will be installed near the company’s headquarters in Springdale, Arkansas, and the company’s team members will help keep the pantry stocked.

“Jessica saw a need and took action to make a difference in her community,” said Debra Vernon, senior director, corporate social responsibility at Tyson Foods. “She exemplifies what it means to be a Meals that Matter Hero, and Tyson Foods is honored to support the Little Free Pantry as it expands to help even more of our neighbors in need.”

Katie Dalheim of Charleston, South Carolina, was so inspired by Jessica and the LFP concept, she established a network of pantries in her community.

“We call them Blessing Boxes, because in the South we like to bless things,” said Dahlheim.  “Since March we have built and placed thirteen boxes with seven more to hit the streets very soon. It is such a simple concept - leave what you can, take what you need - that resonates with people across all demographics.

“I believe that people are inherently good and want to help in their communities, and the LFP system is a great way to put that desire into action,” she said. “With the anonymous give and take, there is no way to know how many lives are touched by this project, but there is no doubt that we as a community are better because of Jessica's idea.

About Tyson Foods’ Meals that Matter® Initiative
After donating 100 million pounds of food over 15 years, Tyson Foods renewed its commitment in the fight against hunger in 2015 by pledging $50 million in cash and in-kind donations by 2020. This commitment focuses specifically on innovative initiatives at the local level.

Tyson Foods Inc. (NYSE: TSN) is one of the world’s largest food companies and a recognized leader in protein. Founded in 1935 by John W. Tyson and grown under three generations of family leadership, the company has a broad portfolio of products and brands like Tyson®, Jimmy Dean®, Hillshire Farm®, Ball Park®, Wright®, Aidells®, ibp® and State Fair®. Tyson Foods innovates continually to make protein more sustainable, tailor food for everywhere it’s available and raise the world’s expectations for how much good food can do. Headquartered in Springdale, Arkansas, the company has 114,000 team members. Through its Core Values, Tyson Foods strives to operate with integrity, create value for its shareholders, customers, communities and team members and serve as stewards of the animals, land and environment entrusted to it. Visit www.tysonfoods.com.

Tyson Foods, Inc. (NYSE:TSN), with headquarters in Springdale, Arkansas, is one of the world's largest food companies with leading brands such as Tyson®, Jimmy Dean®, Hillshire Farm®, Sara Lee®, Ball Park®, Wright®, Aidells® and State Fair®. It is a recognized market leader in chicken, beef and p...