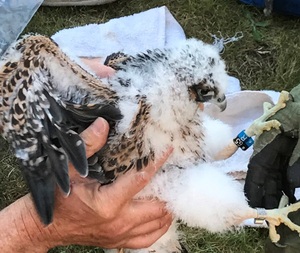 Friday, company employees and the Michigan Department of Natural Resources banded one chick atop the J.H. Campbell Generating Complex. Including this year’s young, it is estimated that about 40 falcons have been hatched at the Campbell site since 2004. Since 1995, a nesting box has been atop the plant’s Unit 1&2 emissions stack, about 200 feet above ground.

“As one of the state’s largest landowners, we take great pride in enhancing and protecting Michigan's environment for future generations,” said John Broschak, Consumers Energy’s vice president of generation operations. “Our role in improving the peregrine falcon population is a great example of this commitment.”

The chick received two sets of bands from the U.S. Fish and Wildlife Service. The bands have a unique serial number and color to indicate the year they were banded and the bird’s gender. They also help track their flight and migration patterns. According to the DNR, falcons hatched in West Michigan have been spotted as far away as Marquette, Mich.; Chicago and Indianapolis.

In addition to the Campbell site, Consumers Energy successfully hatched more than 45 peregrine falcons at the now-closed B.C. Cobb Generating Plant in Muskegon from 2003 to 2015. In early 2016, employee volunteers and the DNR worked to relocate two nesting boxes to a nearby lakefront hotel. There has been no observed nesting activity there this spring.

“We appreciate companies like Consumers Energy who are committed to enhancing and protecting wildlife on their land,” said Nik Kalejs, a senior wildlife biologist with the DNR. “Their employees have been terrific to work with over the years in monitoring peregrine activity.”

About Consumers Energy
Michigan’s largest utility, is the principal subsidiary of CMS Energy (NYSE: CMS), providing natural gas and electricity to 6.7 million of the state’s 10 million residents in all 68 Lower Peninsula counties. We’re creating a sustainable future by focusing on the environment, powering Michigan's economy and investing in people.