In cooperation with the Hellenic-German Chamber 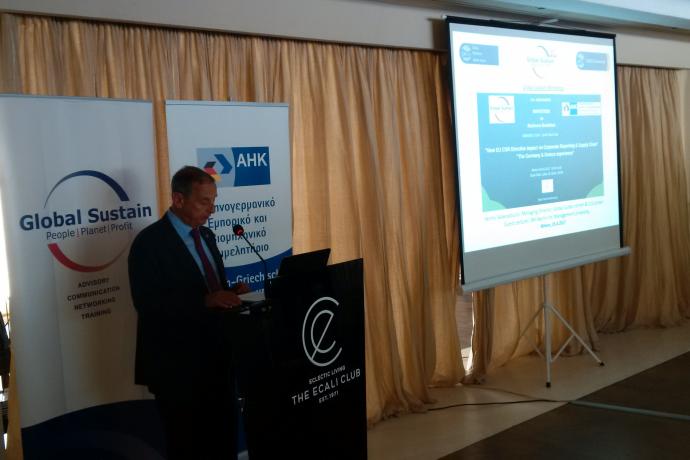 The Business Breakfast entitled "New EU CSR Impact on Corporate Reporting & Supply Chain - Germany & Greece experience", held by Global Sustain in cooperation with the Hellenic-German Chamber, was successfully completed on Wednesday 26th April 2017, in the hospitable premises of Ecali Club, where important associates and members of both organizations were invited.

The opening speech at the business event was given by Mr. Michael Maillis, President of the Hellenic-German Chamber of Commerce and Industry, referring to the importance of sustainable development on the agenda and the priorities of the Chamber.

Thereafter, the event continued with the speech of Mr. Yiannis Salavopoulos, Managing Director of Global Sustain GmbH & International Affairs, Global Sustain Group, who spoke about the German and International perspective of the European Non-Financial Directive, including the standards and tools that can be used in order to have a more supportive role in the implementation of the Directive.

The appointments were completed with the speech of Mr. Michael Spanos, Managing Director of the Global Sustain Group, with references to the Greek perspective through the implementation of Law 4403/2016 and the obligations arising from publications.

The event, which was attended by more than 40 senior executives of businesses and organizations, was closed with networking and breakfast by the Catering Department of Ecali Club.