Standing Fast for MacBride Principles and for Shareholder Rights

Resisting efforts in Congress to exclude 99% of American investors 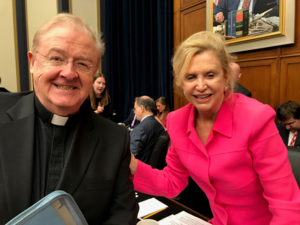 WASHINGTON, D.C., May 01 /CSRwire/ - Friday, April 28, 2017—For the second time this week the House Financial Services Committee held a Hearing on the proposed Financial Choice Act. If passed, the Act would, in effect, eliminate current rules for shareholders’ advocacy for worthy causes, exclude 99% of the American public, and would sabotage the Mac Bride Principles— a corporate code of conduct for American companies doing business in Northern Ireland.

Carolyn Maloney (D-NY) is the Congresswoman for New York's 12th Congressional District, which includes most of the East Side of Manhattan and Roosevelt Island and extends across the East River into the Boroughs of Queens (including Astoria, Long Island City, and parts of Woodside) and Brooklyn (including Green Point). The Congresswoman has been an avid supporter of the Mac Bride Principles from the moment the Principles were launched by the Irish National Caucus on November 5, 1984; Indeed, Congresswoman Maloney is very proud that as a member of the New York City Council (1982-1992) she was a key supporter of the MacBride Bill that was introduced by Councilman Sal Albanese (D- Brooklyn) and  passed by the New York City Council.

The Hearing was boycotted by all but two of the 34 Republicans who serve on the Financial Services Committee, including Chairman Rep. Jeb Hensarling (R-TX), who has proposed the radical, extremist assault on shareholder advocacy. Currently, and for many years, one could submit a shareholder resolution provided one had for at least one year $2,000 worth of shares.

If the extremist changes are passed into law it would mean, for one example, to submit a resolution to Apple, one would need to own, for three years shares worth $7.5 Billion.

“When one considers that the Mac Bride Principles were twice passed by the Republican-controlled Congress (and signed into law by Democrat Bill Clinton in 1998) this is an extraordinary change in direction for Republicans. I cannot understand why they want to confirm the stereotype (which they claim is unfair) of Republicans only being interested in the super rich. Their assault on shareholder resolutions identifies them with 1% of Americans, disdaining the 99%. I cannot believe that good, decent Republican Members of Congress want to be seen in such a light. The late, great Congressman Ben Gilman (R-NY) must be turning in his grave. It was Ben—God rest his noble Jewish-American soul—who, as Chairman of the House International Relations Committee, helped the Irish National Caucus to successfully push the Mac Bride legislation through the Congress.”

Fr. Mc Manus concluded: “I have been hoping that Congressman Peter King (R-NY), a long time outspoken supporter of the Mac Bride Principles— and of how the Principles have combatted Anti-Catholic discrimination in Northern Ireland— would take the lead in convincing the Republicans on the House Services Committee not to sabotage the Mac Bride Principles. But he has “been missing in action” and absent from the past two Hearings. I remember the time that if there was a Congressional Hearing with great importance for Ireland, the entire British Army could not keep Peter from attending. His failure to stand up for the Mac Bride Principles is deeply disappointing. I just don’t know what to make of it.”END.

THE IRISH LOBBY The Irish National Caucus (INC) is the Irish lobby on Capitol Hill, Washington, DC. It is a human rights organization dedicated to getting the United States to stand up for justice and peace in Ireland.