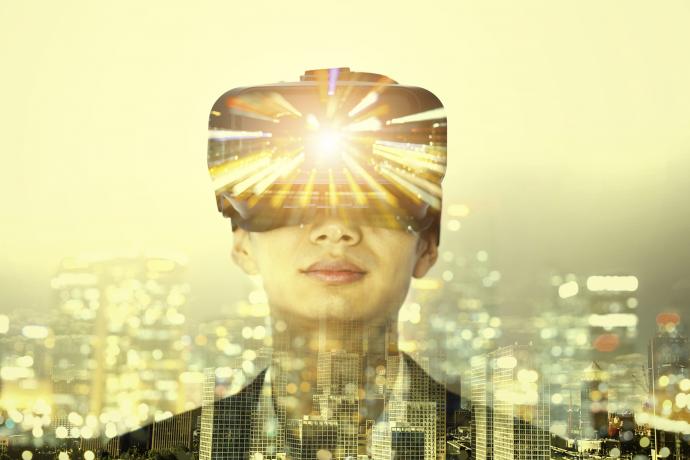 The field of journalism is in a period of transition – not just in terms of its business model, but in terms of exploring new methods of capturing the attention of audiences to communicate what’s happening in the world. The challenges of the day are driving innovations that perhaps would not have happened otherwise.

Immersive journalism refers to content that places the viewer in a first-person experience of a news event. Virtual reality and 360 video provide mechanisms for this kind of storytelling, offering another level of visual and audio storytelling that complement traditional journalistic media.

“The very best journalists and the most powerful stories grip us completely. We think that virtual reality is an immensely powerful way for us to tell new stories in new ways and bring people’s attention to stories in ways that perhaps they wouldn’t otherwise have done,” says AMD Corporate VP of Alliances Roy Taylor.

“With virtual reality, you feel the story with your whole body and not just with your mind. We have the opportunity to really create a connection. If you feel like you’re there, you feel like it could happen to you too,” says de la Peña.

As one of Emblematic’s key technology partners, AMD provides breakthrough hardware and software tools that expedite their post-production workflow. “We’ve been incredibly lucky to have the kind of support from AMD that allows us to push this medium forward together. One of the computers we have used to take us a week to render something and now it takes three hours. That means that stories that would have taken me days and days to get out, now we can probably get up there at the end of a day. That’s a huge difference for journalists,” says de la Peña.

“When you think about immersive journalism right now it’s about providing the user with an experience that they normally don’t have access to,” explains Paul Cheung, Director of Interactive and Digital News Production for AP VR360. “Recently, we did a 360 video in North Dakota with the pipeline protest. That was the perfect medium to do it because it puts the viewer in the crowd with everybody. You get a sense of what that emotional intensity was like from viewing the video.”

AP uses AMD Radeon™ graphics for rapid rendering of life-like VR environments built around news and documentary content. “In news, we have to do things in minutes and seconds rather than in days and months,” says Cheung. “Since partnering with AMD, we have launched a deep exploration into all sorts of 360 content—from video to CG animations. We’ve been able to explore the context of stories as well as the approach.”

Revisiting History—Time Inc. & LIFE VR
“Innovative storytelling is more important than ever. Not just for the business, but for readers. Engaging people in the news now, cutting through the noise, cutting through fake news—those are all challenges that are unprecedented in many ways. So having new tools like immersive storytelling is critical right now in keeping readership engaged and in putting a spotlight on stories that are important,” says Mia Tramz, managing editor of LIFE VR, Time Inc.’s company-wide virtual reality initiative.

LIFE VR’s Remembering Pearl Harbor was developed as an interactive room-scale experience, produced in partnership with AMD, using resources from the National WWII Museum and the Library of Congress. The piece brings viewers back to 1941 to experience Pearl Harbor and its aftermath through the eyes of one of the oldest living American veterans to have survived that day. “Our main objective for taking that material and creating it as a VR experience was to make something that, even for the biggest history buffs, might change even in a small way their understanding of what that moment in history was,” says Tramz.

“Our partnership with AMD is multi-faceted. Their GPUs and CPUs are certainly going to help us push the medium forward. It’s also a creative collaboration. Their engineers bring quite a lot to the production process and our understanding of how we can shape storytelling. It allows us in many ways to bring our experiences to a larger audience.”

Bringing new form and function to non-fiction stories
This new medium has the power to revolutionize how society at large can experience news with greater emotional impact. AMD technology powers these immersive experiences, which allow the viewer to embody a different perspective, gain intimate access to breaking stories, or challenge their understanding of past events.

As AMD’s Roy Taylor notes, “The reasons why AMD is partnering with companies such as Emblematic, Time-Life, and the Associated Press are really two-fold. First, we want to do all that we can to make virtual reality and immersive technologies a success. But the second reason that we do it is because we’re privileged to be able to. And sometimes, if you’re very lucky, you get a chance to just do the right thing.”