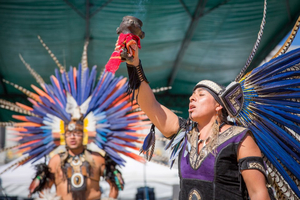 “The March For Science is gaining extraordinary momentum locally and nationally as scientists and the public are increasingly concerned that scientific research continue to be supported and funded,” said Kristen Ratan, Lead Organizer of the March For Science - San Francisco. “We are excited about collaborating with Earth Day San Francisco to focus public attention on climate change and the many key issues that must be addressed in today’s political landscape.”

After the rally and march down San Francisco’s Market Street, the March For Science - San Francisco will join the Earth Day Festival at Civic Center Plaza. The festival will include a Science Fair at the park produced by March For Science supporters and participants, as well as speakers and other activities focused on climate issues, diversity in science and other key topics in the event’s new “Eco Teach In” Dome. The festival will include family-friendly science activities, music and refreshments, and opportunities to engage with local science education and advocacy groups.

“This is a critically important year for the health of the planet, and to maintain respect for the scientific community and the vital research they do on climate issues,” says longtime festival producer Douglas Kolberg.  “Starting with the march and the activities all day at Civic Center Plaza, the focus will be on the importance of climate research and necessary actions to protect the health of our planet.”

The march itself is expected to draw thousands people, and is one of over 400 similar Marches globally (www.marchforscience.com).  Leading scientific organizations, museums and educational institutions all over the country are participating, which locally includes the California Academy of Sciences, the Public Library of Science (PLOS), Audobon CA, NextGenClimate, the 49ers Museum, the Children’s Creativity Museum, the Planetary Society, and the San Francisco Labor Council.