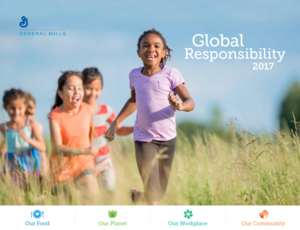 General Mills highlights its progress in the areas of sustainability, nutrition and communities in its 2017 Global Responsibility Report

MINNEAPOLIS, Apr. 11 /CSRwire/ - General Mills released its 2017 Global Responsibility Report, outlining the company’s approach to creating environmental, social and economic value in the countries where it operates. General Mills continues to make significant progress toward nutrition improvements and sustainable sourcing of their food, as well as climate and pollinator protection – all key highlights of this year’s report.

“For 150 years, General Mills has been making food people love while also investing in making the world around us better,” said Ken Powell, chairman and CEO of General Mills. “We believe that being successful in the marketplace and being a force for good go hand in hand. We are proud of the bold actions we have taken to advance sustainability, make innovative nutritional advances to our food, and provide a positive impact in our communities for the consumers we serve.”

Improving Nutrition
In 2016, General Mills made notable progress in giving consumers more food choices that align with consumers’ changing food habits. In the U.S., where progress is measured and tracked against the company’s longstanding Health Metric, 79 percent of the company’s food has been nutritionally improved since 2005. With 98 percent of American Households purchasing a General Mills product at some point during the year, this push to improve the nutrition profile of the company’s food has made a meaningful impact with consumers.

Key to this effort is enhancing positive nutrition such as:

• Less Sugar – General Mills has lowered sugar by five to 30 percent in more than 260 products. Most notably the company has reduced sugar in Yoplait Original yogurt by 25 percent, and all General Mills Big G kid cereals are at 10 grams of sugar or less per serving.

General Mills has also made investments to address changing consumer preferences. Today more than half of General Mills’ U.S. retail products are labeled as free from artificial flavors, artificial preservatives, or colors from artificial sources. The company also continues to see a growing interest in natural and organic foods. General Mills is the fourth largest maker of natural and organic foods in the U.S. One in 10 products sold in North America are USDA certified organic or made with organic ingredients including brands like Annie’s, LARABAR and Cascadian Farm.

For nearly a decade, General Mills has served consumers with Celiac disease and gluten sensitivities. Since Gluten Free Rice Chex was launched in 2008, General Mills has grown its portfolio of gluten-free products to more than 1,000 items. It is now the second largest provider of gluten-free foods, including seven varieties of Cheerios, in the U.S. The company has also introduced gluten-free products in more away-from-home food outlets like restaurants and schools, and in new regions such as Canada and Europe.

Continuing progress toward sustainable sourcing In 2013, General Mills made a commitment to sustainably source 100 percent of the company’s ten priority ingredients by 2020. These priority ingredients represent 40 percent of the company’s annual raw material purchases and include cocoa, vanilla, oats, U.S. wheat, U.S. sugar beets, U.S. corn (dry milled), U.S. dairy (raw fluid milk), fiber packaging, sugar cane and palm oil. Four years into the commitment, the company is at 69 percent of its goal. To date, the most significant progress has been made toward palm oil (100 percent), fiber packaging (99 percent) as well as 50 percent or more of sugar beets, sugar cane and oats.

“As a global food company, we depend on nature to help us make the food people love,” said Jerry Lynch, Chief Sustainability Officer for General Mills. “So it’s vital that we continue to make steady progress toward our ambitious sourcing, climate and water commitments. We also know that one company can’t do it alone, which is why collaboration is critical to realizing our goals.”

Protecting Natural Resources
The food industry relies on the planet’s resources to perform well. General Mills’ progress in 2016 demonstrates the company’s long-term commitment to protect and restore the resources upon which its business and communities depend, focusing on soil health, watershed health and climate.

• Soil Health Roadmap – In 2016, General Mills and The Nature Conservancy unveiled ReThink Soil: A Roadmap to Soil Health. The roadmap outlines 10 key steps spanning scientific, economic and policy priorities to achieve widespread adoption on more than 50 percent of U.S. farmland by 2025. These efforts could result in over $50 billion in social and environmental benefits annually.

• Refreshed Watershed Health Strategy – General Mills set a goal to develop water stewardship plans for the company’s most material and at-risk watersheds in its global value chain by 2025. The company worked in partnership with The Nature Conservancy to reassess and identify priority locations across worldwide operations. In addition, every General Mills production facility has a target to decrease water by 1 percent annually, normalized to production.

• Reduce Greenhouse Gas Emissions (GHG) – In 2016, the company was recognized as a global climate leader and named to the CDP Climate A-List. Absolute GHG emission reductions were made in the value chain areas of shipping, converting, selling and consuming.

•  Increasing pollinator habitat - General Mills is committed to improving the health of ecosystems in its supply chain, which benefits farmers, wildlife, the planet and the food the company makes. Pollinators are responsible for enabling one third of the food we eat. For this reason, we focus on multi-faceted approaches including providing habitat in agricultural landscapes where crops will benefit from the work of pollinators. In 2016, General Mills, the Xerces Society, and the U.S. Department of Agriculture announced a partnership to restore and protect pollinator habitat across hundreds of acres of farmland in North America. The five-year, $4 million financial commitment between General Mills and USDA’s Natural Resources Conservation Service (NRCS) supports farmers across the U.S. by providing technical assistance to plant and protect pollinator habitat, such as native wildflower field edges and flowering hedgerows.

Through 2021, this partnership will help to plant more than 100,000 acres of pollinator habitat. And we continue to collaborate with leading researchers, conservationists and our suppliers to improve the health, quantity and effectiveness of pollinators through research and other efforts.

Supporting communities
In 2016, General Mills Foundation repositioned its global focus areas to more closely tie to the company’s core business and knowledge of food systems. The new focus areas include: Increasing Food Security, Advancing Sustainable Agriculture and Strengthening Hometown Communities. Throughout the last year, the company and its Foundation donated more than $147 million to key initiatives that support communities around the globe, and enabled 57 million meals through General Mills food donations globally.

Other impactful 2016 contributions include:

• 83 percent volunteer – Our employees worldwide give back to their local communities. With 83 percent reporting that they volunteer, we provided more than 328,000 hours of community volunteerism in 2016.

“Our company’s philanthropy is aligned with our business goals now more than ever,” said Mary Jane Melendez, Executive Director of the General Mills Foundation. “This means we can leverage the global reach and know-how of General Mills to make a positive impact in communities worldwide.”

This marks the 47th year General Mills has reported back to stakeholders and the community. Learn more about General Mills’ economic, environmental and social commitments and progress by visiting GeneralMills.com/Responsibility, to view the full Global Responsibility Report, interactive report and 3-minute video.