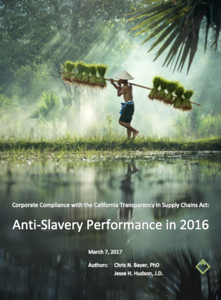 REUTLINGEN, GERMANY, Mar. 30 /CSRwire/ - Join us on April 5, 2017, for an interactive webinar which will explain the findings, trends, and good practices of a recently released anti-slavery compliance benchmarking study. Prepared by the NPO Development International (DI), the study rated the legal compliance, affirmative practice, and transparency of 1,909 companies’ anti-human trafficking and slavery-related disclosure statements of 2016. The law in focus: the California Transparency in Supply Chains Act of 2010 (CA-TISCA). The companies subject to this law include U.S. as well as foreign companies with a combined global revenue of $48.4 trillion in 2016.

In the interactive webinar, DI’s principal investigator Dr. Chris Bayer and DI’s analyst Jesse Hudson are joined by former UN Goodwill Ambassador Julia Ormond, founder and president of the Alliance to stop Slavery and End Trafficking (ASSET), which was instrumental in passing the California Transparency in Supply Chains Act and the UK Modern Slavery Act (2015).

CA-TISCA requires retailers and manufacturers doing business in the state of California with annual worldwide gross receipts exceeding $100 million to publicly disclose the measures they have taken to eradicate modern-day slavery and human trafficking in their supply chains.

About the 2016 Benchmarking Study

The iPoint-funded study indicates that the companies in focus have improved on all fronts as compared to reporting year 2015. More companies had a statement, more were compliant, and more pro-active initiative has been taken by these businesses in their efforts to responsibly produce and source goods which they sell in California. Among the 20 companies which received a combined compliance, affirmative, and transparency score of 86% and above are American Eagle Outfitters (95%), HP (93%), Intel (92%), Burberry (90%), Brooks Sports (90%), Patagonia (89%), GAP (88%), Papyrus (88%), Bath & Body Works (87%), Vans (87%), and Apple (86%).

Evaluated companies can request their individual scorecards with a breakdown of their disclosure compliance, affirmative practice, and transparency score, from this website: http://www.ipoint-systems.com/ca-tisca-2016/

The full report, entitled “Corporate Compliance with the California Transparency in Supply Chains Act: Anti-Slavery Performance in 2016”, can also be downloaded from this website.

iPoint is a leading provider of software and consulting for environmental and social product compliance, and sustainability. Tens of thousands of companies around the globe rely on iPoint for managing, tracking, analyzing, and reporting data across the whole value creation network. iPoint’s softw...