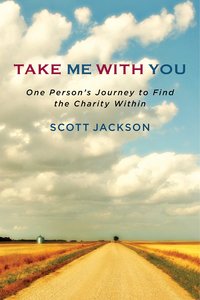 ALEXANDRIA, Va., Mar. 21 /CSRwire/ - “Take Me with You” by Scott Jackson, president and CEO of Global Impact, was released today and is now available in bookstores nationwide and online. Published by SelectBooks, Inc., it is a moving personal story that will make people laugh, cry, and hopefully inspire them to take action and find the “charity within”—Jackson’s personal philosophy of making a choice to live in a way that improves life for others.

Jackson’s story begins during America’s civil rights movement, a time when his family fell apart and his childhood became a struggle to escape his brutal reactionary father to live with his mother and the African-American pastor she had married. When he ultimately runs away from his abusive father, he finds a new life with the people who gave him the guidance and inspiration to become the man he is today. Out of his tumultuous childhood, Jackson found himself on a life course that is focused on charity and spreading goodwill in a cynical world.

Jackson’s narrative of his life runs parallel to short essays that encourage others to make the connection between their personal struggles and larger cultural problems of people worldwide. His call to action highlights Global Impact’s charity partners and how their work connects to the Global Goals for Sustainable Development (SDGs).

Today, Jackson is a major force in global philanthropy, and is known for his visionary leadership and compassion. At Global Impact he oversees all aspects of the organization, which has raised more than $1.8 billion since inception to help the world’s most vulnerable people. Previously, Jackson served as vice president for external relations at PATH and as senior vice president of World Vision US. He also sits on boards and advisory councils of several nonprofits.

“My purpose in writing the book and sharing my story was to hopefully inspire people to find the charity within, and to recognize the difference they can make in other people’s lives,” said Jackson. “There are so many people in need around the world and so many wonderful organizations working tirelessly to improve conditions and contribute toward achieving the Sustainable Development Goals. I hope this book brings additional visibility to some of those organizations and is a call to action to everyone who reads it.”

A percentage of book sales will be donated to Global Impact and go toward promoting the work of the organization’s charity partners. SelectBooks also plans to donate a portion of the proceeds it receives to charitable organizations. For information on where to purchase “Take Me with You” visit www.charity.org/takemewithyou.

SelectBooks, Inc., is an independent publisher based in New York City. Since its inception, SelectBooks has had a dual mission. First and foremost, the organization seeks to bring the reader both new and proven voices from a striking variety of realms. For the nonfiction market SelectBooks aims to continue publishing provocative books on politics and current events, informative business books for entrepreneurs and leaders, and successful self-help books, memoirs, and works on the subjects of spirituality, psychology, philosophy, music, health, and alternative medicine. SelectBooks is also proud of its titles in a more recent line of commercial and literary fiction.

In addition to producing the best offerings possible to the reading public, SelectBooks is also always looking for ways to streamline the publishing process for authors. With a management and staff who bring a tremendous amount of editorial, book production, and marketing experience to the table, SelectBooks has established a publishing entity that attracts both maverick visionaries and proven best-selling authors.

Global Impact is a leader in growing global philanthropy. The organization builds partnerships and raises resources that help the world’s most vulnerable people by providing integrated, partner-specific advisory and secretariat services; campaign design, marketing and implementation for workplace and signature fundraising campaigns; and fiscal agency, technology services and integrated giving platforms. Global Impact works with nearly 450 public and private sector workplace giving campaigns to generate funding for an alliance of more than 100 international charities. Through strategic council and implementation support, Global Impact equips private sector and nonprofit organizations to achieve their philanthropic goals. The organization also serves as administrator for four of the world’s largest workplace giving campaigns, including the Combined Federal Campaign of the National Capital Area (CFCNCA) and the Combined Federal Campaign-Overseas (CFC-O). Since 1956, Global Impact has generated more than $1.8 billion to help the world’s most vulnerable people.