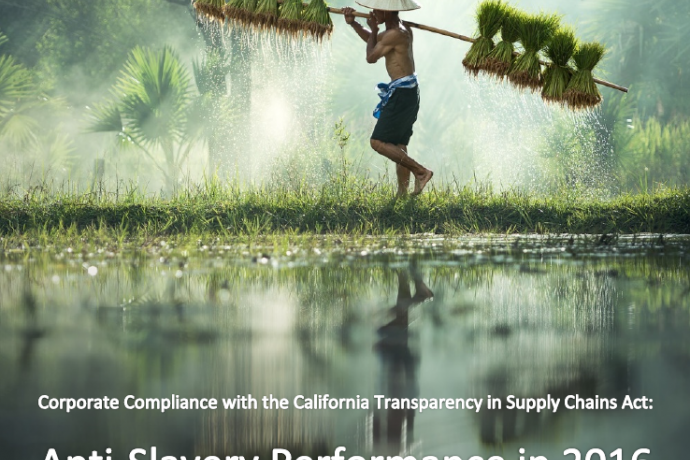 Social and environmental compliance, sustainability, and digital circular economy expert iPoint is excited to announce the release of a new comprehensive benchmarking report which evaluates brands on their anti-slavery compliance with the California Transparency in Supply Chains Act of 2010 (CA-TISCA). Funded by iPoint and prepared by Development International (DI), a not-for-profit organization specialized in evaluations, the report rates the legal compliance, affirmative practice, and transparency of 1,909 companies’ anti-human trafficking and slavery-related disclosure statements of 2016.

Improvements on All Fronts
The study indicates that the companies in focus have improved on all fronts as compared to reporting year 2015. “More companies have a statement, more are compliant, and more pro-active initiative is being taken by these businesses in their efforts to responsibly produce and source goods which they sell in California,” Dr. Chris Bayer, DI’s Principal Investigator and co-author of the study, states.

CA-TISCA requires retailers and manufacturers doing business in the state of California with annual worldwide gross receipts exceeding $100 million to publicly disclose the measures they have taken to eradicate modern-day slavery and human trafficking in their supply chains. The companies subject to the Californian law include U.S. as well as foreign companies with a combined global revenue of $48.4 trillion in 2016.

For 2016, the study measured a noticeable improvement in companies’ anti-slavery compliance and actions as compared to the previous year. For example, in 2015, only 41% percent of the 1,504 evaluated companies had a corporate disclosure score on or above the 70% mark. In 2016, 52% of the 1,909 evaluated companies had a disclosure score above 70%. According to Bayer, “This increase not only indicates that legal compliance with this particular anti-slavery disclosure law is gradually improving, it also underlines that the issue of modern day slavery is receiving increased visibility around the globe.”

2016 Top Scorers
Among the 20 companies which received a combined compliance, affirmative, and transparency score of 86% and above are American Eagle Outfitters (95%), HP (93%), Intel (92%), Burberry (90%), Brooks Sports (90%), Patagonia (89%), GAP (88%), Papyrus (88%), Bath & Body Works (87%), Vans (87%), and Apple (86%). One top 20 company in particular stands out as to the significant progress it has made since 2015: NXP Semiconductors N.V. (87%) has shown a 71% improvement in the compliance area, and an 80% improvement concerning its affirmative practice. In November 2016, the Dutch global semiconductor manufacturer was announced as one of the winners of Thomson Reuters Foundation’s high-profile Stop Slavery Award, which recognizes businesses that have excelled in efforts to eradicate forced labor from their supply chains.

Evolving Transnational and Cross-Sector Efforts
“There are definitely flagship brands and industries leading the way in the anti-slavery area, and recent as well as upcoming laws in France, Australia, and other countries indicate the encouraging shift in the number of countries that are engaging on the issue”, iPoint-CEO Joerg Walden emphasizes. “However, in order to effectively tackle and eradicate human trafficking and modern-day slavery around the globe, joint efforts, learning from peers, supply-chain wide collaboration and cross-sector solutions such as the electronic Labor Rights Template (eLRT) are key.”

“The catch 22 is that brands can lead, but cannot complete the task in isolation,” Julia Ormond highlights in the report’s foreword. “Conversely, self-acknowledgement of slavery risk in supply chains would beget supply chain mapping, sector and cross-sector partnerships; to enable new solutions and anti-slavery measures to evolve and prove their value.” Ormond is founder and president of the Alliance to stop Slavery and End Trafficking (ASSET), which was instrumental in passing the California Transparency in Supply Chains Act and the UK Modern Slavery Act (2015).

Resources:
The full report, entitled “Corporate Compliance with the California Transparency in Supply Chains Act: Anti-Slavery Performance in 2016”, can be downloaded from the iPoint website at http://www.ipoint-systems.com/ca-tisca-2016/

Evaluated companies can also request their individual scorecards with a breakdown of their disclosure compliance, affirmative practice, and transparency score, from this website.

iPoint is a leading provider of software and consulting for environmental and social product compliance, and sustainability. Tens of thousands of companies around the globe rely on iPoint for managing, tracking, analyzing, and reporting data across the whole value creation network. iPoint’s software and consulting services support you in meeting and staying one step ahead of regulations and requirements such as REACH, RoHS, WEEE, ELV, Conflict Minerals- and Modern Slavery-related laws, as well as other trending developments in the compliance and sustainability arena.