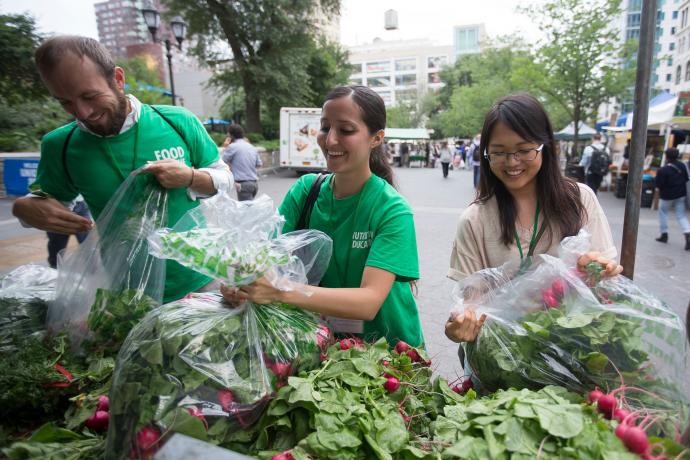 As City Harvest continues to expand its anti-hunger programming, creating a secure environment is a key consideration, and virtual desktop infrastructure was chosen because of its ability to isolate the environment. After researching several converged and hyperconverged infrastructure solutions to host virtual desktops, City Harvest selected the Cisco® HyperFlex System, which allows the organization to create hundreds of virtual desktops in minutes and easily add additional processing power using Cisco UCS® blades. In addition, troubleshooting and support are handled with a single call to Cisco to resolves any issue: servers, networking, or storage. City Harvest was one of the first nonprofits in the United States to adopt this new technology.

Flexibility for Employees and Volunteers
Cisco HyperFlex and the Cisco Nexus switches were up and running in just one day, and the City Harvest IT team built hundreds of virtual desktops in minutes. Employees and volunteers can now log in to their personal virtual desktops from anywhere. “With other options, we would have had to replace our existing platform to support VDI, but with Cisco we could blend UCS and HyperFlex technology into a hybrid data center environment and continue using our older storage technology,” said Safonov.

Increased Efficiency
The new thin clients cost 75 percent less than new desktop computers, and City Harvest no longer needs to keep spare computers in inventory. If a virtual desktop develops problems, the organization can now build a new one in less than a minute. City Harvest also chose Cisco Unified Computing System™ (UCS) to run its business applications: by moving 100 virtual machines from traditional servers to Cisco UCS, they eliminated an entire rack.

About Cisco
Cisco (NASDAQ: CSCO) is the worldwide technology leader that has been making the Internet work since 1984. Our people, products, and partners help society securely connect and seize tomorrow's digital opportunity today. Discover more at thenetwork.cisco.com and follow us on Twitter at @Cisco.

About City Harvest
City Harvest pioneered food rescue in 1982 and, this year, will collect 55 million pounds of excess food to help feed the nearly 1.4 million New Yorkers struggling to put meals on their tables.  Through relationships with farms, grocers, restaurants, and manufacturers, City Harvest collects nutritious food that would otherwise go to waste and delivers it free of charge to 500 soup kitchens, food pantries and other community food programs across the five boroughs.  In addition to helping meet the immediate need for food, City Harvest developed long-term Healthy Neighborhoods programs which partner with low-income communities to increase access to fresh produce and help residents shop for and cook nutritious, budget-conscious meals.  To learn more about food rescue, Healthy Neighborhoods and fighting hunger in New York City, visit cityharvest.org.