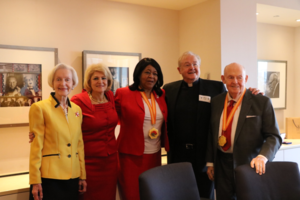 The ceremony took place at the AFL-CIO headquarters, on the eight floor, overlooking the White House.

Fr. Mc Manus said: “Mr. Sweeney and Ms. Powell were selected as the 2016 of this Award because of their life-long dedication to social justice and fair employment—the very foundation of peace, because peace is the fruit of justice. Those who work for justice are, therefore, the real peace workers.”

Barbara Flaherty said: “It was a joy and a blessing to confer this honor an Ms. Powell and Mr. Sweeney, both most worthy recipients. It was, indeed, a very special event. We are most grateful for President Richard Trumka, AFL-CIO, graciously putting his headquarters at our disposal.”

The Leader and Master Planner of the World Peace Prize movement is Rev. Dr. Han Min Su, in Seoul. Dr. Han, who is a Presbyterian Minister, has been the driving force behind the World Peace Prize since he launched it in 1989. He was unable to attend but sent a Delegation of three people— one of whom, Ms. Hwang Seo Eun,read Dr. Han’s statement. The other two members of the Delegation were Ms. Kim Sung Sim and Mr. Lim Ki Taeg.

Fr. Mc Manus concluded: “All of this is due to the visionary leadership of Dr. Han. We are proud to help in any way we can, and we are inspired by his vision of world peace. We are honored to serve on the International and Inter-Faith board, which consists of representatives of all the nine major religions in the world: Judaism, lslam, Hinduism, Buddhism, Confucianism, Catholicism, Protestantism, Russian Orthodox and Zoroastrianism.”

THE IRISH LOBBY The Irish National Caucus (INC) is the Irish lobby on Capitol Hill, Washington, DC. It is a human rights organization dedicated to getting the United States to stand up for justice and peace in Ireland.