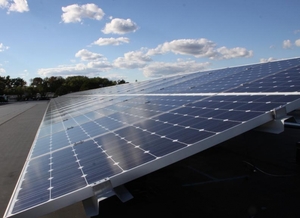 ATLANTA, Feb. 07 /CSRwire/ - UPS (NYSE: UPS) today announced plans to significantly escalate its investment in solar energy as an owner/operator of solar assets starting with at least eight of its facilities in the U.S. The installations will be completed by the end of 2017. The estimated $18 million investment will provide a nearly five-fold increase in the amount of power generated from solar at UPS facilities today.

With more than 2,580 UPS facilities worldwide, UPS is ideally positioned to expand its investment in renewable energy. UPS expects additional solar deployments to occur over the next several years as it identifies suitable opportunities.

The completion of these projects will expand UPS’s owned solar power generating capacity by almost 10 megawatts. The combined power produced from these projects is equivalent to providing electricity to approximately 1,200 homes annually. The  expanded solar portfolio is expected to reduce carbon emissions by approximately 8,200 metric tonnes per year.

“Solar technology is a proven way to effectively and efficiently provide long-term power to our facilities,” said Bill Moir, director of Facilities Procurement, UPS. “We have a significant number of facilities that are well positioned to deploy solar at scale and increase our sustainable energy options for our buildings and electric vehicles.”

Solar panels have the ability to generate electricity for more than 25 years. UPS will purchase over 26,000 solar panels during the expansion. Once installed, each building will effectively produce 50 percent of its daily energy use via the sun. As a result,UPS will own and operate the installations providing additional flexibility over the long term. As a company with significant engineering and construction expertise, UPS will also be taking a leadership role in both the design and implementation of these projects.

UPS’s investment in solar power began in 2004 in Palm Springs, Calif., where solar panels were installed and are still generating approximately 110 kilowatts of sustainable energy. Today, UPS also produces solar power at its facilities in Lakewood, Parsippany and Secaucus, N.J.

UPS continues to invest in alternative fuels for both its stationary and mobile assets. The company has invested more than $750 million in alternative fuel and advanced technology vehicles and fueling stations globally since 2009. UPS deploys more than 8,100 vehicles in its Rolling Lab,  matching what works best in each situation. From old-fashioned pedal power and electric-assisted bicycles in dense urban areas like London and Hamburg to electric and hybrid electric vehicles in the U.S., and natural gas, renewable natural gas and propane globally, UPS is putting sustainability innovation into action, all over the world.

About UPS
UPS (NYSE: UPS) is a global leader in logistics, offering a broad range of solutions including the transportation of packages and freight; the facilitation of international trade, and the deployment of advanced technology to more efficiently manage the world of business. UPS is committed to operating more sustainably – for customers, the environment and the communities we serve around the world. Learn more about our efforts at ups.com/sustainability. Headquartered in Atlanta, UPS serves more than 220 countries and territories worldwide. The company can be found on the Web at ups.com® and its corporate blog can be found at Longitudes.ups.com. To get UPS news direct, visit pressroom.ups.com/RSS or follow @UPS_News on Twitter.