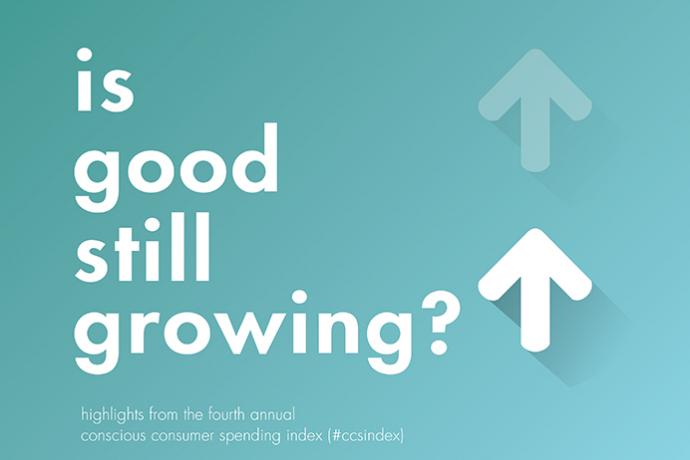 A two-year steady climb in social responsibility among consumers experienced a slip in 2016, according to the fourth annual Conscious Consumer Spending Index (#CCSIndex). In total, 1,012 Americans were polled this year for the ongoing benchmarking study, which is fueled by Good.Must.Grow. (GmG), a socially responsible marketing consultancy.

“While a decrease is not what we expect or want to see from the index findings, the sky is not falling on socially responsible spending,” said Heath Shackleford, founder of Good.Must.Grow. “The important thing to keep in mind here is that two-thirds of consumers are buying socially responsible goods and services and nearly one-third are increasing the frequency of those purchases year-over-year, while avoiding socially irresponsible businesses. There is still a lot of activity and momentum in this space.”

The mild slide in conscious consumerism was seen throughout this year’s results. Consumers reported being slightly less likely to have recycled/favored reusable products contributed financially to a charity, or volunteered time to a charity, compared with the 2015 index findings. They also saw these activities as slightly less important than previous years of the study.

Sticker Shock Hampering Social Shopping?
When comparing intentions versus actions, 60 percent of consumers who planned to spend more responsibly in 2015 accomplished their goal, compared with 73 percent who had the same goal for 2014 and 76 percent in 2013.

The power of the BOGO persists as well. Nearly half of respondents said they’d prefer to cash in a “buy one, get one free” offer from a store, rather than the retailer commit to giving away a similar product to someone in need or making a financial donation to a charity based on their purchase.

“This is heavy lifting,” said Shackleford. “A shift of this significance is going to experience stalls and setbacks. At the end of the day, we are rewiring the way business works in this country and changing core consumer behaviors that have been deeply embedded for decades. That requires patience and perseverance. The truth is the demand for ‘good business’ is absolutely there. I’d worry about the long-term prospects of any organization who doesn’t continue to take this movement seriously.”

Charities in Crisis?
In addition to a decline in donations of clothing and household items, volunteerism and the number of Americans financially contributing to nonprofits, there’s more bad news for charities. In 2015, 18 percent of Americans said they preferred to “give back” by purchasing socially responsible products, versus donating to charities or through a combination of both activities. In 2016, that number rose to 22 percent. Nearly half (47%) of these respondents believed purchasing socially responsible products was a more effective way to support positive change, while 40 percent cited the convenience of giving back while shopping.

Despite waning engagement with charities, the news wasn’t completely negative. When asked about the effectiveness of various groups to create positive change in society, 70 percent of Americans said nonprofits were effective. This was roughly 20 percentage points higher than social enterprises, major corporations, local government and almost 30 percentage points higher than the federal government, while only trailing individuals (72%) for the highest rating overall. Additionally, those committed to charities are all in, as 25 percent of Americans said they planned to increase their financial contributions next year, compared to 24 percent in 2015 and 18 percent in 2014.

Top 20 Good Company Poll
This year marked the #CCSIndex’s second annual top 20 “Good Company” poll, compiled by responses to the question, “What company or organization do you think of first when you think of socially responsible companies/organizations?” Based on unaided recall by respondents, organizations were ranked based on how frequently they were named. This year’s top 20 is an eclectic mix of organizations that includes well-known social enterprises, Fortune 500 brands and iconic nonprofits.

About the Study
This study was conducted in partnership with Supportive Research Solutions and What They Think Research. Sampling was provided by Research Now. Data was collected Oct 28-Nov 7, 2016. In total, 1,012 Americans were surveyed. Margin of error is +/-3%. For more information on the Conscious Consumer Spending Index, please visit www.goodmustgrow.com/ccsindex

After closely observing the outcomes from the first three years of this study, the scoring algorithm for the #CCSIndex was modified in 2016 to more accurately detect movements in conscious consumerism. By increasing the sensitivity of the scoring mechanism, the index now more specifically reflects smaller scale shifts in social responsibility. This allows for a more precise representation of subtle changes in importance, behavior and intent. The original methodology produced a score of 65 in 2013, 68 in 2014 and 68 again in 2015.

About Good.Must.Grow.
Good.Must.Grow. provides strategic marketing support for socially responsible businesses, nonprofit causes and organizations that are focused on health + wellness. We want to be part of a revolution that drives societal change by sparking increased charitable giving and community involvement as well as unprecedented levels of corporate social responsibility. Proud to be a Certified B Corp. See how we’re #GrowingGood at http://www.goodmustgrow.com.