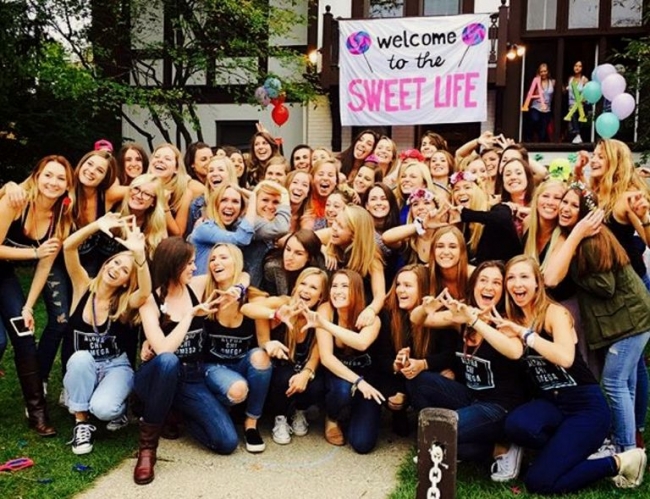 Throughout the month of October, supporters viewed a gallery of photos and voted for their favorite submissions that followed the prompt, “I support domestic violence awareness because…” The entries with the most votes were awarded monetary prizes for donation to a domestic violence organization of the collegian or alumna’s choice.  Winners were announced on November 1st on the Alpha Chi Omega Facebook page.

“Domestic violence awareness isn’t just a philanthropic priority for Alpha Chi Omega – it’s a core principle and focus of our educational work for more than 20,000 collegiate members and more than 180,000 alumnae," shared Amy Colvin Mustafa, Senior Director of Education and Engagement for Alpha Chi Omega. “For more than two decades, we’ve worked to help women feel empowered to develop healthy relationships. Not only do our efforts during October give members the support and resources to grow as real, strong women, they also teach them how to ask for help – or offer help – should they personally encounter relationship violence.”

As part of the Mary Kay Don't Look Away campaign, which works to educate the public on recognizing the signs of an abusive relationship and how to take action, an estimated 20,000 are educated annually on domestic violence prevention and healthy dating relationships through the company’s partnership with Alpha Chi Omega. Earlier this year, a Healthy Relationships Forum was hosted at Southern Methodist University uniting hundreds of college students and community advocates for a moderated discussion featuring domestic violence experts, advocates and survivors.

“In partnership with Alpha Chi Omega, we are able to raise awareness and educate young women about domestic violence and therefore, helping to prevent the abuse before it begins,” said Kirsten Gappelberg, Director of Corporate Social Responsibility and Sustainability for Mary Kay Inc. “As a corporate leader in the fight against domestic violence, Mary Kay is committed to fostering healthy dating relationships and teaching the next generation how to identify and avoid abusive relationships which is critical in breaking the cycle of this epidemic that impacts one in four women in the United States today.”

To date, Mary Kay Inc. and The Mary Kay Foundationâ„  have given $53 million to domestic violence prevention and awareness programs in an effort to end the cycle of abuse. Mary Kay is also the lead sponsor of the nation’s first-ever text-based dating abuse helpline operated by loveisrespect. For more information about Mary Kay’s commitment to end domestic violence, visit marykay.com/dontlookaway.

About Mary Kay
Irresistible products. Positive community impact. Rewarding opportunity. For more than 50 years, Mary Kay has offered it all. With 3.5 million Mary Kay Independent Beauty Consultants and $4 billion in global annual sales, Mary Kay is a top beauty brand and direct seller in more than 35 markets around the world. Discover what there is to love about Mary Kay by connecting with a Mary Kay Independent Beauty Consultant at marykay.com.

About Alpha Chi Omega
Alpha Chi Omega is a values-driven women’s fraternity founded in 1885. As a nonprofit organization, it supports more than 200,000 living members in 143 college chapters and colonies and 193 alumnae chapters across the United States. The Fraternity is far more than a social organization, more than a place to live, or a way to meet people. Its mission is to enrich the lives of members through lifetime opportunities for friendship, leadership, learning and service. Learn more about Alpha Chi Omega at alphachiomega.org and facebook.com/alphachiomegahq.

Mary Kay is one of the world’s largest direct selling companies with more than $3 billion in annual wholesale sales worldwide. Mary Kay was founded in 1963 by Mary Kay Ash with the goal of helping women achieve personal growth and financial success. Mary Kay remains committed to enriching women’s lives, and today more than 2.4 million people of all backgrounds are enjoying the advantages of being Mary Kay Independent Beauty Consultants. Mary Kay’s high-quality skin care and color cosmetic products are sold in more than 35 countries around the world. To learn more about Mary Kay, visit www.marykay.com.