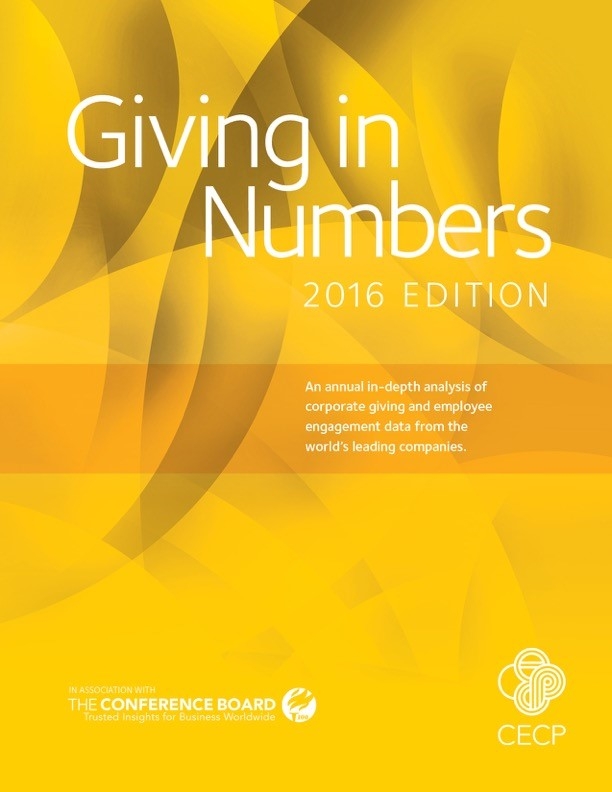 In the most comprehensive annual analysis of corporate societal engagement, CECP: The CEO Force for Good, in association with The Conference Board, found in their annual Giving in Numbers survey that the link between a company’s business strategy and their engagement with society is ever more vital, as are the people within the company leading this connection. With the growing recognition that long-term business performance is tied to social responsibility, companies are allocating bigger budgets to the community engagement team, elevating giving officer roles and responsibilities, and ensuring that both employees and customers are able to show their commitment to giving back through the brand.

CECP, a coalition of more than 200 of the world’s largest companies with a combined annual revenue of more than $7 trillion, released, in association with The Conference Board, Giving in Numbers: 2016 Edition, a report on the largest societal engagement survey of 272 companies, now in its 11th year.

“The leading companies in today’s global economy have infused societal needs in business strategy, binding the well-being of their communities to the health of their bottom line,” said Daryl Brewster, CEO, CECP. “Giving in Numbers is an essential handbook for businesses seeking to be industry-leaders of corporate societal engagement in the coming years.”

For more than ten years, Giving in Numbers has been the leading study on the funds, resources, and skills that companies invest in globally to solve pressing societal challenges. Key findings from this year’s survey include:

“Data from 2016’s Giving in Numbers all point to the growing importance of the corporate societal engagement office in leading companies around the world, which should come as no surprise when increasingly, business performance is tied to social responsibility,” said Carmen Perez, Director, Data Insights, CECP. “Giving in Numbers offer data-backed insights for companies seeking robust financial results alongside a meaningful and effective corporate societal engagement program.”

“With employees and customers increasingly rewarding responsible businesses, companies are underpinning their business strategies and brands with purpose,” said Jonathan Spector, CEO, The Conference Board. “The data show those efforts starting to pay off, so it’s no surprise to see companies doubling down on their community engagement by expanding teams and giving department leaders more of an audience with the CEO.”

Key insights from the Giving in Numbers survey of 2015 data were released in front of an audience of 250 corporate societal engagement professionals at the CECP Summit in May 2016.

Additional learnings from this year’s report include:

Custom analysis of the data is available to CECP-affiliated companies at no additional cost; these companies can access data through CECP’s secure online portal or by calling CECP. 2015 data is now available online.

CECP is grateful to Newman's Own Foundation, PwC US, and The Travelers Companies, Inc. for their support in making Giving in Numbers possible.

Note to Editors: Carmen Perez is available for comment and a more in depth look at the community investment data collected from 272 of the world’s largest companies.

ABOUT CECP: THE CEO FORCE FOR GOOD
CECP is a coalition of CEOs united in the belief that societal improvement is an essential measure of business performance. Founded in 1999 by Paul Newman and other business leaders, CECP has grown to a movement of 150 CEOs of the world’s largest companies across all industries. Revenues of engaged companies sum to $7 trillion annually. A nonprofit organization, CECP offers participating companies one-on-one consultation, networking events, exclusive data, media support and case studies on corporate engagement. For more information, visit http://cecp.co.

ABOUT THE CONFERENCE BOARD
The Conference Board is a global, independent business membership and research association working in the public interest. Our mission is unique: To provide the world’s leading organizations with the practical knowledge they need to improve their performance and better serve society. The Conference Board is a non-advocacy, not-for-profit entity holding 501 (c) (3) tax-exempt status in the United States. www.conference-board.org

The Committee Encouraging Corporate Philanthropy (CECP) is the only international forum of business leaders focused on increasing the level and quality of corporate philanthropy. Membership includes more than 180 global CEOs and chairpersons of companies that collectively account for more than 40% of reported corporate giving in the United States. Membership is by invitation and is renewed annually.

Founded in 1999 by actor and philanthropist Paul Newman, together with John Whitehead, Peter Malkin, and other business leaders, CECP continues to inspire and challenge leaders in the private sector to find innovative ways to fulfill unmet social needs and to lead the way towards better alignment of business and social strategies.