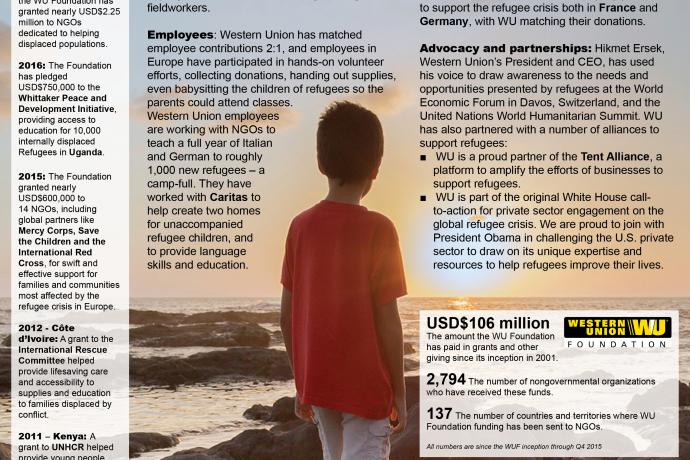 As a founding partner of the White House Call-to-Action for private sector engagement on the global refugee crisis, the Western Union Company (NYSE: WU), a leader in global payment services, today announced expanded participation. The Western Union Foundation has pledged a three-year grant support totaling USD$ 750,000 to the Whitaker Peace & Development Initiative (WPDI) that will help provide access to education for 10,000 refugees in Uganda.

“The need for assistance is great, and a crisis of this scale requires action on many fronts,” said Ersek. “Supporting the people in the communities that we serve through education and economic opportunity is in the DNA of Western Union and can provide new ways toward a better future.”

WPDI’s successful approach to training refugees focuses on life skills, vocational training and entrepreneurship. This will serve as a blueprint to implement a new program in a camp in Kiryandongo, Uganda where the UNHCR reports that approximately 70,000 refugees and asylum seekers from Kenya, Congo, Rwanda, Burundi and South Sudan reside, 85% of whom are under 18. Uganda hosts the eighth-largest refugee population in the world, third-largest in Africa.

“After meeting Hikmet at the United Nations World Humanitarian Summit this year, it became clear that partnering with the Western Union Foundation was a natural fit and alignment with our passion and purpose for strengthening communities,” said WPDI Founder and CEO, Forest Whitaker. “Connecting to people, empowering them with the tools they need to succeed, and teaching them to give back to others is a very powerful thing.”

About Western Union
The Western Union Company (NYSE: WU) is a leader in global payment services. Together with its Vigo, Orlandi Valuta, Pago Facil and Western Union Business Solutions branded payment services, Western Union provides consumers and businesses with fast, reliable and convenient ways to send and receive money around the world, to send payments and to purchase money orders. As of June 30, 2016, the Western Union, Vigo and Orlandi Valuta branded services were offered through a combined network of over 500,000 agent locations in 200 countries and territories and over 100,000 ATMs and kiosks, and included the capability to send money to billions of accounts. In 2015, The Western Union Company completed 262 million consumer-to-consumer transactions worldwide, moving $82 billion of principal between consumers, and 508 million business payments. For more information, visit www.westernunion.com.

About the Whitaker Peace & Development Initiative
WPDI is a non-governmental organization with an international scope and reach, founded by Forest Whitaker in 2012. WPDI develops an array of peacebuilding programs, initiatives and campaigns to foster peace and reconciliation in disadvantaged and fragile communities in Africa, Latin America, and the United States. Our mission is to help societies impacted by destructive conflicts transform into safer and more-prosperous communities. Visit us online at www.wpdi.org and follow us on Twitter (@connectWPDI), Facebook, and Instagram (whitaker_peace).

The Western Union Company, a leader in global payment services, believes access to financial services is a necessity. Western Union moves money reliably and quickly to almost every country - and we do it for extraordinary people seeking a better life and for businesses that generate jobs and opportunity.