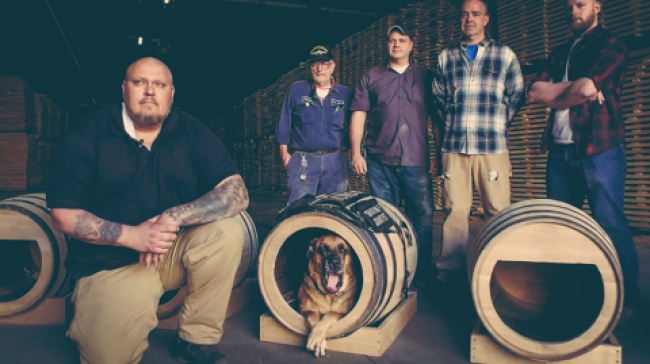 “Life after combat isn’t easy, but it can still be really good” is one message the new documentary “Reinforcements” delivers to U.S. military veterans suffering from Post-Traumatic Stress Disorder (PTSD). The short film, which debuted at a private screening in Louisville, aims to raise awareness and provide life-saving service dogs to veterans who return from combat to find they face a new battle against PTSD. The film was produced by Early Times® Kentucky Whisky in partnership with K9s For Warriors, a non-profit organization committed to training service canines for veterans suffering from trauma resulting from military service.

“Reinforcements” follows the transformational journey of Travis Davis – a retired Army Corporal struggling with PTSD – as he adjusts to civilian life with the help of Joe Swoboda – a retired Army Sergeant First Class – and his service dog companion, Lilly.

“So many veterans don’t know there is a tremendous support network available to them after they return from service through organizations like K9s For Warriors,” said Swoboda. “It’s been such a privilege to share my story through this film, and I hope that ‘Reinforcements’ will help even more veterans who are struggling with PTSD discover a new opportunity to restart their lives and move forward.”

After meeting in Washington, D.C., for a visit to Arlington Cemetery, Davis and Swoboda set out on a 2,167-mile road trip, stopping in Louisville, Kentucky, and Macon, Georgia, on their way to Ponte Verde, Florida, where they join fellow veterans for a graduation ceremony at K9s For Warriors. Along the way, Davis, Swoboda, and Lilly receive some unexpected gifts and meet with other K9s For Warriors graduates who are learning to cope with their past and live their lives to the fullest – thanks to the help of their service dog companions.

“Early Times and our parent company, Brown-Forman, have a long history of giving back to the men and women who have so bravely served our country and preserved our freedom through their sacrifice,” said Marc Hindorff, senior brand manager for Early Times. “Every veteran who receives a service dog from K9s For Warriors has a story to tell – we wanted to share those stories across the country. We hope that ‘Reinforcements’ will increase awareness and support for K9s For Warriors with the goal of pairing even more service dogs with veterans, empowering them to continue living life with independence and dignity after military service.”

“Reinforcements” is one component of a multi-year campaign made possible by: Early Times; its parent company,Brown-Forman Corporation, which has a long history of military support; and BRAVE, a Brown-Forman veterans employee resource group. Earlier this year, Early Times donated more than $100,000 to K9s For Warriors to fund training for five warrior/service dog teams.

As another part of the campaign, veterans at the Brown-Forman Cooperage created custom barrel doghouses for service canines and the brand has invited consumers aged 21 and up to help K9s For Warriors name the five sponsored service dogs. Fans can suggest their favorite names on the Early Times Facebook page through the end of August.

“Reinforcements” has been accepted into the Louisville International Festival of Film, scheduled for October, and will be touring the film festival circuit in the coming months. The documentary will be made available for public viewing later in 2016. The film’s trailer may be viewed online at EarlyTimes.com.

ABOUT BRAVE:
Brown-Forman Rallying All Veterans for Excellence (BRAVE) is a veterans’ employee resource group seeking to create a network to identify, support, develop and promote the unique characteristics and needs of military veterans and their families throughout Brown-Forman’s business locations and surrounding communities.

ABOUT K9s FOR WARRIORS:
K9s For Warriors was founded in 2011 by
Shari Duval after her son Brett returned from Iraq as a contractor suffering from Post-Traumatic Stress Disability. Duval recognized a need to innovatively and effectively treat the devastating epidemic. What started as an idea developed into a passionate nonprofit organization committed to saving the lives of rescue dogs and military heroes alike. Since 9/11, there have been 130,000 veteran suicides (22 lives lost a day to PTSD). Through a three-week, live-in training program – at no cost to the veterans – K9s For Warriors graduates are much better equipped to return to civilian life with dignity and independence while reducing their risk of suicide. The mission of K9s For Warriors is to stop these 22 daily suicides altogether.