When green energy is cheaper than black, the world will be running on sustainable energy. That is why DONG Energy is working hard to bring down the cost of offshore wind. 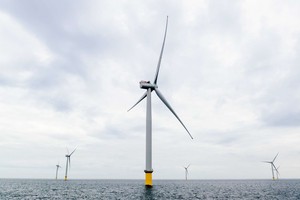 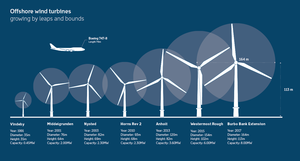 FREDERICIA, DENMARK, Jul. 06 /CSRwire/ - The cost of black energy has now got green competition. Solar power and onshore wind are already cheaper than fossil alternatives and according to DONG Energy, offshore wind must follow the same development. DONG Energy aims to make green energy from offshore wind turbines at least as cheap as black energy from fossil fuels in ten years. The Danish energy company, which is among the global leaders within offshore wind power, gives five specific examples of how that is going to happen.

"Larger wind turbines are good news for the environment. The larger the wind turbines, the more kilowatt-hours will be fed into the sockets for each blade rotation. With today's experience and technology, we can build and operate offshore wind turbines which are far more efficient than in the past, and that can help bring down the cost of electricity from offshore wind," says Jesper Skov Gretlund.

2. Less steel makes for less expensive foundations
It requires solid steel foundations to anchor offshore wind turbines safely in the seabed. But steel is expensive. Therefore, good savings can be made if the foundations can be made smaller. In cooperation with a number of business partners, DONG Energy has completed the research project PISA (Pile Soil Analysis) and tested 28 different pile foundations in different soil conditions. The study of the piles, which varied in size, type and amount of steel, gave an interesting result.

"The PISA investigation shows that until now we've used more steel than necessary. By cutting down on the amount of steel, we can save a lot of money when we build our offshore wind farms. Not only on steel, but also because we can use smaller vessels to transport and install the foundations," says Jesper Skov Gretlund, Project Manager in DONG Energy's Research & Development department.

3. Easier inspection with intelligent cameras
Building offshore wind farms costs money. And the same goes for service and maintenance of the wind farms once they have been constructed. Here too, DONG Energy works to reduce costs. For example, new technology has made it easier and cheaper to inspect offshore wind turbines. Previously, specially trained technicians had to crawl out onto each blade and examine each turbine in detail to see if they were damaged or defective. It was a very demanding and hazardous work which only made it possible to inspect one single wind turbine per day. Today, DONG Energy has developed a method using state-of-the-art equipment to take pictures of the wind turbine blades from a distance.

Jesper Skov Gretlund explains: "When performing inspections today, we can use the intelligent cameras, which will take 200 to 250 pictures of each blade. Doing it that way, a team of two will be able to do inspections of three turbines per day."

The cost savings are significant. On the one hand, the method requires far less resources and on the other hand, the inspection is much faster. Previously, wind turbines had to be put at a standstill for an entire day. Now, a couple of hours out of operation gives enough time to perform the inspection.

4. Larger ships equals less time at sea
Normally, it is not an advantage to sleep at work. But with the new SOVs (service operation vessels), a longer stay offshore will help reduce the costs for transport and non-productive man hours.

Before, technicians were transfered back and forth to the offshore wind farms every day. It created disturbances in the work process and cost a lot of transport time. To optimise the work process, DONG Energy has recently invested in two SOVs which, in addition to the crew cabins, can accommodate 40 wind turbine technicians. The vessels sail out to the wind farms where they drop anchor and function as a base for the technicians. The vessels are a kind of floating hotels where the technicians eat, sleep and relax close to their temporary workplace at sea.

5. No reinventing the wheel
According to DONG Energy, standardisation is a fifth and decisive factor that will make green offshore wind power cheaper than black energy.

"Offshore wind is still a young industry, but after 25 years, we've established a routine so that we don't have to reinvent the wheel every time we're going to construct an offshore wind farm. Today, we can execute both better and cheaper than before, and that development will become even more successful in future once standardisation kicks in for good," says Jesper Skov Gretlund.

In short, it is about constructing offshore wind farms in areas where the soil and wind conditions are similar to those the company is already familiar with. Also, the wind turbines are, to an increasingly larger extent, built with standardised components which are produced by suppliers in a competitive market. In this way, the cost of spare parts and service is brought down. Exactly as we know it from car repair shops.

Firmly on track
The plan to generate green energy from offshore wind power at the same cost as black within the next decade is ambitious, but not unrealistic. In 2012, DONG Energy set a target of reducing costs for the construction of offshore wind farms by 35-40% by 2020. And the company is well on the way to reaching this target. But according to Jesper Skov Gretlund, there are many factors which are decisive in realising this project.

Jesper Gretlund concluded: "The entire offshore wind industry must work hard and dedicated to reduce the cost of electricity. When we compete on know-how and innovation, the cost is reduced, and this results in more green energy. It's not an easy task, but if we work together, we're well on the way to a future with green and independent energy."