Three winners were recognized at the Corporate Eco Forum’s 9th Annual Leadership Retreat, for exemplifying the fundamental connection between sustainability, innovation and long-term business success in a globalizing world.

Three winners were recognized at the Corporate Eco Forum’s 9th Annual Leadership Retreat, for exemplifying the fundamental connection between sustainability, innovation and long-term business success in a globalizing world. 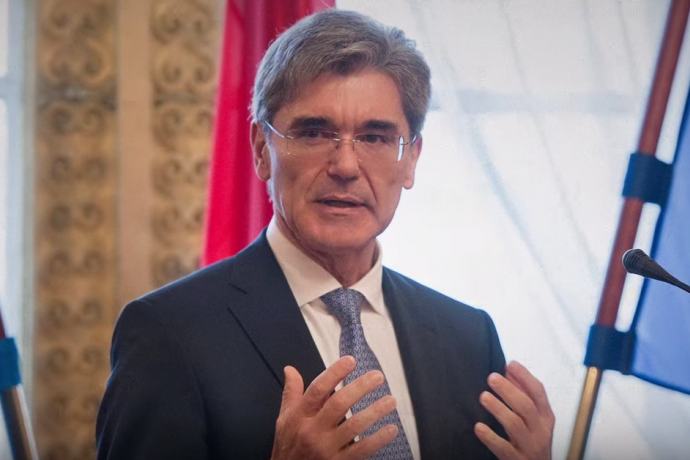 The Corporate Eco Forum (CEF) presented the 2016 C.K. Prahalad Award to Siemens and CEO Joe Kaeser for setting an ambitious agenda to tackle the challenge of climate change. The jury also extended special honors to Christiana Figueres, who served as the Executive Secretary of the UN Framework Convention on Climate Change and negotiated the landmark Paris Agreement; and posthumously to Douglas Tompkins, in recognition of his immense dedication to conservation and environmental activism. The awards were announced at the CEF Annual Retreat, attended by senior executives representing CEF member companies with combined revenues of over $3 trillion.

SIEMENS AND CEO JOE KAESER
Joe Kaeser has been outspoken about the need for the private sector to lead the charge on climate change mitigation, and not wait for an international treaty or new regulations. In a New York Times Op-Ed he boldly stated, “We hope to demonstrate to other companies that cutting your carbon footprint is not only possible, but profitable.”

Under his leadership, Siemens has pledged to cut its own global carbon footprint 50% by 2020 and achieve a net-zero carbon footprint by 2030. The company is also leading the way on clean energy by increasing use of distributed energy systems at its own sites, combining solar panels, wind and highly efficient gas turbines with intelligent energy management, smart grids and energy storage solutions, and buying clean power. Siemens portfolio of environmental products, which contribute to ensuring a sustainable future by helping customers significantly reduce their carbon dioxide emissions, accounted for 43% of revenues in 2015.

CHRISTIANA FIGUERES
In her role as Executive Secretary of the UN Framework Convention on Climate Change, Christiana Figueres successfully rebuilt momentum towards a positive, universally-agreed global climate resolution, which was accomplished at the conclusion of the twenty-first Conference of the Parties, COP21, where 195 nations unified to adopt the Paris Agreement.

In 2010, Figueres was appointed as Executive Secretary of the UN Framework on Climate Change in the wake of the failed Copenhagen climate conference of 2009. She went on to lead increasingly successful Conferences of the Parties in Cancun 2010, Durban 2011, Doha 2012, Warsaw 2013, and Lima 2014—all of which paved the way to the Paris 2015 negotiations.

Working tirelessly with allies across sectors, she rallied major companies behind a strong agreement in Paris, backed by meaningful actions including investments in clean energy, avoided deforestation, reduced greenhouse gas emissions and innovative green technology. CEF Chair P.J. Simmons added, “Many of our members were fortunate to experience Christiana’s extraordinary optimism and energy firsthand, and were motivated to make significant commitments in the lead up to the Paris negotiations. We’re thrilled that the jury offered her this special recognition.”

DOUGLAS TOMPKINS, THE NORTH FACE AND ESPIRIT HOLDINGS FOUNDER
Doug Tompkins has been selected for a posthumous C.K. Prahalad Award, following his untimely death in Patagonia National Park last year. Founder of The North Face and Esprit Holdings, Tompkins devoted his life to conservation. His passion and vision resulted in the protection of roughly 2.2 million acres of land throughout Chile and Argentina including Patagonia National Park. The Corporate Eco Forum was fortunate to witness Tompkins’ work as a part of its 2015 Sustainability Leadership Development Trip to the Park, led by Tompkins’ life-long friend and conservation partner, Rick Ridgeway.

Ridgeway presented the honor in a moving tribute to Tompkin’s many accomplishments. Tompkins founded the Foundation for Deep Ecology, a private charitable foundation that has made more than1500 grants (totaling more than $52 million) to nonprofit organizations working to protect wilderness and wildlife, promote sustainable agriculture, and more. Doug also founded The Conservation Land Trust, Conservacion Patagonica, and Fundacion Pumalin.

The C.K. Prahalad Award was created to honor the vision and life’s work of the late Dr. C.K. Prahalad, one of the world’s most influential business strategists. Towards the end of his career, Prahalad focused his enormous talent on the link between sustainability and long-term business success. In a 2009 Harvard Business Review cover story he co-authored with CEF founder MR Rangaswami, Prahalad argued that over the next decade “traditional approaches to business will collapse, and companies will have to develop innovative solutions. That will only happen when executives recognize a simple truth: sustainability equals innovation.” Prahalad was a senior adviser to CEF before his untimely death in 2010.

The C.K. Prahalad Awards were presented at the Ritz Carlton, Key Biscayne in Miami, Florida, during CEF’s 9th Annual Retreat, focused on “Driving Sustainability Integration Across the Business.”

ABOUT THE CORPORATE ECO FORUM
The Corporate Eco Forum (CEF) is an elite, invitation-only membership organization comprised mainly of Fortune and Global 500 companies from 18 industries with combined revenues of over $3 trillion. CEF provides a year-round safe, neutral space for influential executives to exchange best practice, collaborate, and innovate. Participants are almost exclusively VP and C-level executives across multiple business functions. The diversity of executives, coupled with the cross-industry nature of CEF, creates a world-class platform to accelerate sustainable business problem solving and innovation.

CEF is an invitation-only network of leading executives from Fortune and Global 500 companies driving sustainability strategy and innovation worldwide. Members include Fortune and Global 500 companies from diverse industries with combined revenues of $4 trillion. CEF provides a year-round safe, neutral space for influential executives to exchange best practice, collaborate, and innovate. The diversity of executives, coupled with the cross-industry nature of CEF, creates a world-class platform to accelerate sustainable business problem solving and innovation.