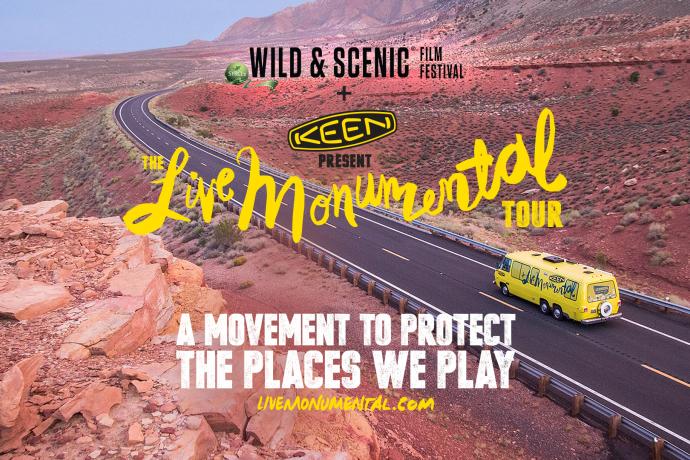 In the first 10 months of KEEN’s Live Monumental campaign, the movement traveled 7,500 miles across 25 states, captured more than 40,000 petition signatures, rallied support from more than 50 businesses, and hosted more than 47 events – including a reception on Capitol Hill in October that marked the finale of the 2015 tour and start of KEEN’s 2016 campaign efforts.

Along the journey, hundreds of hours of video was logged and thousands of photos taken to share the experience and create the Live Monumental film. Today, KEEN announces the global premiere of their documentary film on Earth Day, Friday April 22, at the Cowell Theater in San Francisco. The 18-minute film showcases the KEEN team’s epic journey from Portland, OR. to Washington, D.C., as they sought to raise awareness for the preservation of 3 million acres of public lands. The Live Monumental film will be a featured film in this year’s Wild & Scenic Film Festival – which celebrates the natural world through environmental and adventure films.

“It’s about encouraging folks to remember the conservation ethic that Theodore Roosevelt established in the early 1900s when he said: “It is not what we have that will make us a great nation; it is the way in which we use it." This film and the Live Monumental movement is a rallying cry to encourage all of us to live in favor of the future,” said Kirsten Blackburn, Marketing Manager, KEEN Effect.

From breathtaking vistas of our country’s dramatic and awe-inspiring landscapes to the trials and tribulations of driving a yellow, 1976 GMC RV cross-country to engaging local support and Congressional leadership on Capitol Hill, the film captures the true spirit of Teddy Roosevelt and drives home the timely importance of protecting our country’s public lands for future generations. At the premiere in San Francisco, the yellow RV will be on hand, the yellow carpet will be rolled out, and the public can get a firsthand experience of what the road trip, and the movement, entail.

The film will also continue on with the Wild & Scenic Film Festival through January 2017. Following the 10-stop tour, KEEN’s Live Monumental film will be landing on more than 75 college campuses across the country from Sept-Oct. as part of the Outdoor Foundation's "Campus Challenge" to educate students about the environment, recreation, and outdoors.

“KEEN’s Live Monumental movement is the perfect, real life example of Wild & Scenic’s mission in action: to celebrate the natural environment by instilling a sense of wonder and use film to inspire activism. We couldn’t be more excited to host the film’s world premiere, and to then take it on the road for 10 more stops, activating communities across the country,” said Melinda Booth, Wild & Scenic Film Festival Director.

Since the start of the Live Monumental campaign, two of the five target areas that KEEN has focused on advocating for national monument designation have been protected: Boulder White-Clouds in Idaho was designated Wilderness in August 2015, and Mojave Trails in southern California was one of three new national monuments signed into law by President Obama in February to create the second largest protected desert in the world. The remaining three areas KEEN aims to help protect include: Owyhee Canyonlands, OR, Birthplace of Rivers, WV., and Gold Butte, NV.

“Our history of national public lands conservation has given us places where dark skies, pristine rivers, wild nature, and our ancient history thrives,” said Kirk Richardson, Senior Director, KEEN Effect. “Yet some of these public lands stand unprotected, encroached upon by development and extractive industries that threaten our legacy. This tour was created to remind folks that they are not alone.  There is a large segment of people that care passionately about protecting these special places.”

Inspired by a love of the outdoors, KEEN, Inc., a manufacturer of hybrid outdoor and casual products, including footwear, clothing, and accessories, is dedicated to creating quality products that support the lifestyles and outdoor adventures of active people around the world. KEEN products can be found online and through more than 5,000 retail locations in more than 60 countries, as well as in KEEN Garage retail stores in the U.S., Europe, and Asia. The company’s operations and culture reflect a stand-out commitment to building a strong community and a healthier planet so that all can create, play, and care. Learn more at http://www.keenfootwear.com.

Driven by a passion to make the outside and trades accessible for all, KEEN is a values-led, family-owned footwear brand from Portland, Oregon committed to creating original and versatile products, enhancing lives, and inspiring adventures outside. Founded in 2003, it launched a revolution in the industry with the debut of the Newport adventure sandal. It continues to launch game-changing products and establish new standards for performance, comfort, and design while actively working to Detox the Planet. The brand formalized its values commitment under the banner of The KEEN Effect.  Learn more at www.keenfootwear.com