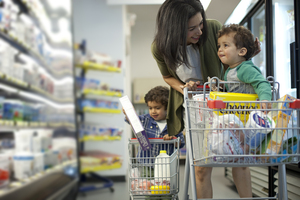 For 150 years, General Mills has been serving the world by making food people love. 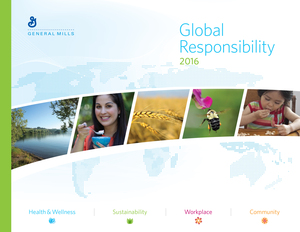 MINNEAPOLIS, Apr. 13 /CSRwire/ - Today, General Mills released its 2016 Global Responsibility Report, which outlines the company’s goals and progress in the areas of health and wellness, sustainability, workplace and community engagement. This marks the 46th year General Mills has shared a report with stakeholders and the community.

“For 150 years, General Mills has been serving the world by making food people love,” said Ken Powell, chairman and CEO of General Mills. “Our goal is to continue doing so for another 150 years by treating the world, its resources and people with care. We are encouraged by our progress over the last year and remain committed to doing even more.”

General Mills’ progress towards its health profile improvements, sustainable sourcing commitment, and climate and water stewardship efforts are among the key highlights of this year’s report.

As a food company, General Mills recognizes that consumers around the world seek nutritious, convenient and affordable food for themselves and their families every day. General Mills believes that proper nutrition is essential for overall health and wellness.

Since the company implemented its U.S. Health Metric in 2005, more than 1,000 products have been nutritionally improved. In 2010, General Mills accelerated the company’s sodium reduction efforts by pledging to reduce sodium 20 percent in 10 key U.S. retail product categories by 2015, and by the end of 2015 the company met or exceeded its goal in seven out of 10 categories and made significant progress in the other three.

Similarly, in response to consumers’ changing preferences, in 2015 General Mills committed to removing artificial flavors and colors from artificial sources from all of the company’s cereals by the end of 2017.

In 2013, General Mills committed to sustainably source 100 percent of its 10 priority ingredients by 2020, representing more than 50 percent of the company’s annual raw materials purchases. These raw materials, ranging from palm oil to wheat, oats, cocoa, dairy and corn, are ingredients the company believes can have the greatest impact from a sourcing standpoint.

To date, the most significant progress has been made toward fiber packaging (99 percent) and palm oil (100 percent) as well as nearly 50 percent or more sustainably sourced in vanilla, sugar cane and U.S. sugar beets.

The company achieved its 2015 targets related to GHG emissions and packaging within its direct operations. However, General Mills’ greatest environmental impacts – including more than two-thirds of greenhouse gas (GHG) emissions and 99 percent of water use - occur outside its supply chain, primarily in agriculture. Taking its GHG emissions commitment to the next level, the company set targets to reach science based, sustainable emission levels by 2050, and to make an initial reduction of 28 percent across the full value chain – from farm to fork to landfill – by 2025.

To advance the company’s water stewardship work, General Mills continued its long-standing partnership with The Nature Conservancy to analyze challenges and opportunities within the company’s most material and at-risk watersheds. Findings from this work were used to develop collaborative plans with stakeholders and communities to optimize water use and conservation.

In 2015, General Mills also released its Water Policy, which guides the company as it engages with stakeholders to improve the health of watersheds critical to its business.

“The most collaborative work we do as a company is through our climate and water stewardship efforts,” said Jerry Lynch, vice president and chief sustainability office at General Mills. “With each commitment, it becomes more evident that we can make a significant impact and accomplish more by working together.”

Respect for human rights is fundamental to General Mills and its purpose. In 2015, General Mills joined in and implemented critical policies that established its Policy on Human Rights with a primary emphasis on the supply chain, and signed onto the UN Women’s Empowerment Principles to reaffirm its commitment to promoting equal opportunity for women.

General Mills has a long-standing tradition of being deeply connected to the communities in which it conducts business – from France to Madagascar, Ghana to India, and Australia to North America.

Giving and volunteerism is focused on increasing food and nutrition security, advancing agricultural and environmental sustainability and strengthening the company’s hometown communities. In 2015, General Mills and the General Mills Foundation donated more than $154 million to key initiatives that support communities around the globe, and 20 million meals were enabled through General Mills food donations globally.

“When we share our employees’ food expertise, knowledge and skills with communities and partners around the globe, our potential impact exceeds more than any philanthropic budget could ever yield on its own,” Mary Jane Melendez, executive director of the General Mills Foundation.

General Mills is committed to continually advancing the humane treatment of animals in agriculture across the company’s supply chain. In 2015, the company updated its animal welfare policy to include ‘the five freedoms’ beyond dairy cows to all other animals across the supply chain, and committed to using 100 percent cage-free eggs in its U.S. operations by 2025. The company will work closely with suppliers to deliver on these commitments.