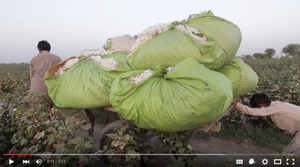 LONDON, Apr. 04 /CSRwire/ - The Thomson Reuters Foundation, the philanthropic arm of the world’s biggest news and information provider, today launched a high-profile award as part of a drive aimed at engaging the world’s biggest companies in the fight against forced labour.

The Stop Slavery Award is the first global accolade to recognise businesses that have excelled in efforts to try to eradicate forced labour from their supply chains.

The Award, an artwork by Turner-prize winning artist Anish Kapoor, will spearhead a campaign that demonstrates businesses can play a critical role in eradicating forced labour and guiding consumer decisions. The ultimate goal of the initiative is to galvanise more companies to investigate, improve and eradicate unfair and illegal labour practices in their supply chains.

“This is a business friendly initiative,” said Thomson Reuters Foundation CEO Monique Villa, founder of the prize. “The Stop Slavery Award is about rewarding the courage of those businesses that have gone above and beyond to ensure their revenue is not tainted by modern-day slavery. At a time when shareholders are increasingly vigilant over the socio-economic footprint of many corporations, the Award is an important contribution to ensure that the fight against slavery is perceived both as a human rights priority, and a business imperative.”

Companies wishing to apply for the Award will complete a questionnaire developed in partnership with global law firm Baker & McKenzie and other experts in the field. The questionnaire highlights best practice in corporate commitment and reporting, performance measurement, business partner engagement, risk assessment and investigation and remediation. The standards are intended to ensure that anti-slavery policies and procedures are embedded throughout the behaviour, operations and supply chains of the companies applying for the Award.

The Stop Slavery Award will be presented for the first time on November 30 this year during the Thomson Reuters Foundation’s annual women’s rights and anti-trafficking conference Trust Women.

The application process will remain strictly confidential with only the names of shortlisted corporations made public. Winning companies will receive the right to use the Stop Slavery logo for one year, helping raise cross-sector awareness on forced labour.

Artist Anish Kapoor said: “There are more slaves today than ever in history. How can we stand by and watch? Many of the things we use everyday are touched by forced labour.”

“The public sector can’t tackle human trafficking on its own – corporations must protect the workers who enhance their bottom line,” said Manhattan District Attorney Cyrus R. Vance, Jr., who sits on the Award’s judging board. “I am honoured to be a part of this effort to recognise companies that are taking proactive steps to examine their supply chains, and working to ensure that their profits do not come at the expense of human rights.”

Applications for the Stop Slavery Awards are open until August 26, 2016. Finalists will be invited to attend the Trust Women conference on November 30 where the winners will be announced.

About the Thomson Reuters Foundation
The Thomson Reuters Foundation acts to promote socio-economic progress and the rule of law worldwide. The organisation runs initiatives that inform, connect and ultimately empower people around the world: access to free legal assistance, media development and training, editorial coverage of the world’s under-reported stories, and the Trust Women conference.