Submitted by: Mitsubishi Corporation Foundation for the Americas 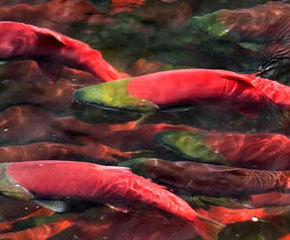 NEW YORK, Dec. 17 /CSRwire/ - On November 19, 2015, the Board of Directors of the Mitsubishi Corporation Foundation for the Americas (MCFA) approved new grants that promote biodiversity conservation in ecologically sensitive areas, while also enhancing social and environmental sustainability in agriculture and marine resource supply chains.

The new grants include: a 3-year grant to the Wild Salmon Center for its California Stronghold Initiative, which aims to ensure that the healthiest salmon habitats in California remain healthy; a 3-year grant to  the Universidad de la Frontera, in Temuco, Chile, to promote the sustainable use of non-traditional forest products in Southern Chile; a 3-year grant to Pronatura Noroeste, to protect Red Knot habitat in Baja California, Mexico, which builds on past support for shorebird conservation in Mexico; seed funding to Fair Trade USA, for the introduction of Fair Trade labor standards in agriculture supply chains in North America; and general support grants to the Environmental Grantmakers Association and International Funders for Indigenous Peoples, two affinity groups that MCFA has been actively involved in for many years. The new grants, combined with payments coming due for grants approved in prior years, amount to over $1.6 Million in total grant commitments.

The MCFA board also approved a proposal to enhance its signature program related investment (PRI) in Root Capital by converting a one-year, $300K interest-free senior loan to long-term, subordinated debt.  By leveraging  the subordinated debt, Root Capital will be able to attract more senior debt, and thereby significantly expand its lending activities and provide much needed capital to many more agricultural businesses in Latin America and Africa that lack access to commercial credit.

The Foundation’s mission encompasses biodiversity conservation, environmental education, environmental justice and sustainable development, and it is but one of several means through which Mitsubishi Corporation  is already supporting the Sustainable Development Goals newly adopted by the UN to become effective on January 1, 2016.

Mitsubishi Corporation (MC) is a global integrated business enterprise that develops and operates businesses across virtually every industry including industrial finance, energy, metals, machinery, chemicals, living essentials, and environmental business. MC's current activities are expanding far beyond its traditional trading operations as its diverse business ranges from natural resources development to investment in retail business, infrastructure, financial products and manufacturing of industrial goods. With over 200 offices and subsidiaries in approximately 90 countries worldwide and a network of over 600 group companies, MC employs a multinational workforce of over 65,000 people.