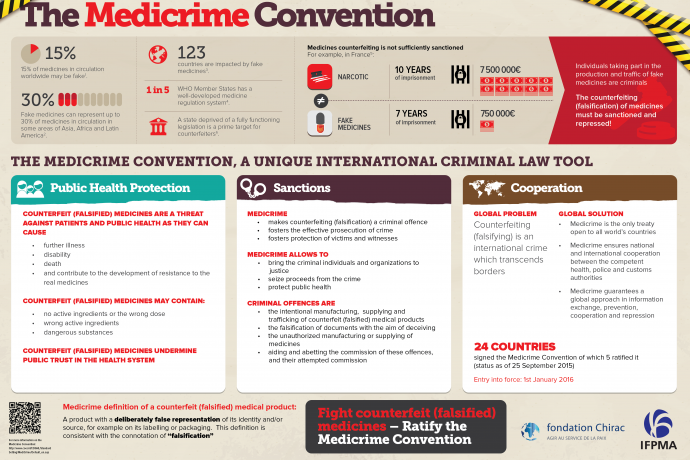 A unique international tool criminalizing the trade of counterfeit medicines, the Medicrime Convention, will enter into force on 1st January 2016, after 5 countries[1] out of its 24 signatories completed the ratification process. The Medicrime Convention, launched by the Council of Europe in December 2010 is opened for signature by all countries in the world and aims to curb what it defines as counterfeit (falsified) medicines[2], that is medicines whose identity and/or source have been falsely represented.

IFPMA, EFPIA, PhRMA, IGBA, EGA, and GPhA and their members – the global innovative and generic/biosimilar pharmaceutical industries – welcome such a significant development and the role played by the European Directorate for the Quality of Medicines and Healthcare (EDQM) of the Council of Europe. They stand ready to work closely with all those engaged in the fight against fake medicines and share their expertise where they can to help with the implementation and enforcement of Medicrime.

Counterfeit medicines can have the wrong active ingredients, the wrong dose or dangerous substances and could result in drug resistance, further illness or disability or even death. All medicine categories are affected, be it originators’ or generic, prescription-only or over-the-counter medicines.

“Counterfeit medicines, which are mainly linked to organized crime, have considerably grown in recent years, given the high profits and opportunities offered to criminals, including through the spread of e-commerce. Yet, in many countries, the trade of counterfeit medical products is even less sanctioned than selling narcotics for instance and such impunity does come at the detriment of patients’ health”, said EFPIA’s Director General Richard Bergstrom.

Global pharmaceutical associations share the view that there is a global shared responsibility to tackle the issue effectively and promptly. All associations join forces to protect patients, by improving product security through, e.g., the European Medicines Verification System, and by raising awareness about the dangers of counterfeit medicines, as does the Fight the Fakes campaign which gives a voice to the victims and shares the stories of those working to put a stop to this threat to public health.

“Counterfeit medicines frustrate the concept of quality of medicines. Where quality is not ensured, patient safety is at risk” said Adrian Van Hoven, EGA Director General. “Fake medicines are a global concern and people in low- and middle-income countries are especially at risk. The proportion of fake medicines is as much as 10% globally, while in some areas of Asia, Africa and Latin America, fake medicines may account for up to 30% of medicines in circulation[3]. In Africa, one-third of all malaria medicines are probably fake[4]. This threat requires a multi-stakeholder and multi-disciplinary collaboration both at local and global levels”, he added.

While the entry into force of the Medicrime Convention is a decisive milestone, the fight against counterfeit medicines requires even more widespread support. EFPIA, IFPMA, PhRMA, IGBA, EGA, GPhA and their members encourage other countries worldwide to sign and ratify the Convention.

NOTES TO THE EDITOR

Medicrime refers to the Council of Europe Convention on the counterfeiting of medical products and similar crimes involving threats to public health. It was adopted on 8 December 2010 by the Committee of Ministers of the Council of Europe and was actively supported by the European Union. It is the first international treaty to establish a criminal legal framework to prevent and combat threats to public health, by providing tools to fight against falsified medical products and similar crimes, through 3 pillars (Article 1):

IFPMA represents research-based pharmaceutical companies and associations across the globe. The research-based pharmaceutical industry’s 2 million employees research, develop and provide medicines and vaccines that improve the life of patients worldwide. Based in Geneva, IFPMA has official relations with the United Nations and contributes industry expertise to help the global health community find solutions that improve global health.

The International Generic and Biosimilar Medicines Association (IGBA) was founded as IGPA (International Generic Pharmaceutical Alliance) in March 1997 to strengthen cooperation between associations representing manufacturers of generic medicines. Its membership includes the EGA (Europe), the CGPA (Canada), the GPhA (USA), the JGPMA (Jordan), the NAPM (South Africa), the TGPA (Taiwan) and the JGA (Japan) while the associations from Australia (GMiA), Brazil (ProGenericos) and Mexico (AMEGI) are Associate Members. The IGBA is at the forefront of stimulating competitiveness and innovation in the pharmaceutical sector by providing high quality pro-competitive medicines to millions of patients around the world. Through its constituent member associations, the IGBA maintains constant dialogue with government authorities (including the European Commission for Europe) as well as with international institutions such as WTO, WIPO and WHO. More information: www.igpagenerics.com.

The European Federation of Pharmaceutical Industries and Associations (EFPIA) represents the pharmaceutical industry operating in Europe. Through its direct membership of 33 national associations and 39 leading pharmaceutical companies, EFPIA is the voice on the EU scene of 1,900 companies committed to researching, developing and bringing to patients new medicines that will improve health and the quality of life around the world.

EGA represents the European generic, biosimilar and value added medicines industries, which provide high-quality cost-competitive medicines to millions of Europeans. Companies represented within the EGA provide over 160,000 skilled, high value direct jobs in Europe. Generic medicines save EU patients and healthcare systems over €40 billion each year and account for 55% of all dispensed medicines but for only 21% of the pharmaceutical expenditure in Europe. The European generic and biosimilar medicines industries’ vision is to provide sustainable access to high quality medicines for all European patients, based on 5 important pillars: patients, quality, value, sustainability and partnership. For more information please follow EGA at www.egagenerics.com and Twitter @egagenerics and @ebgbiosimilars.

The Pharmaceutical Research and Manufacturers of America (PhRMA) represents the country’s leading innovative biopharmaceutical research companies, which are devoted to discovering and developing medicines that enable patients to live longer, healthier, and more productive lives. Since 2000, PhRMA member companies have invested more than $600 billion in the search for new treatments and cures, including an estimated $51.2 billion in 2014 alone.

Click here to view a PDF of this release.

The International Federation of Pharmaceutical Manufacturers & Associations (IFPMA) represents research-based pharmaceutical companies and associations across the globe. Based in Geneva, IFPMA has official relations with the United Nations and contributes industry expertise to help the global health community find solutions that improve global health.

Research-based pharmaceutical companies make a unique contribution to global health as innovators of life-saving and life-changing medicines and vaccines, which improved millions of lives around the world. Both IFPMA and its companies are involved in hundreds of partnerships, including the new Access Accelerated initiative, a partnership of over 20 biopharmaceutical companies developing innovative and sustainable solutions to improve access to non-communicable disease (NCDs) treatment and care in low- and middle income countries. Access Accelerated also partners with the World Bank and the Union of International Cancer Control to help address the full spectrum of access barriers to NCD medicines. These partnerships involve the discovery of treatments that threaten health security or unduly put a burden on low income countries, as well as support Universal Health Coverage (UHC) by expanding access to medicines and vaccines and strengthening health systems and in doing so, contribute to the Sustainable Development Goals (SDG 3 and SDG 17).

IFPMA hosts the Secretariat of the AMR Industry Alliance, a coalition of over 100 biotechnology, diagnostic, generics and research-based biopharmaceutical companies and trade associations that was formed to drive and measure industry progress to curb antimicrobial resistance. The AMR Industry Alliance ensures that signatories collectively deliver on the specific commitments made in the Industry Declaration on AMR and the Roadmap and measures progress made in the fight against antimicrobial resistance.

Other initiatives supported by IFPMA include: The African Global Health Leaders Fellowship and Fight the Fakes.