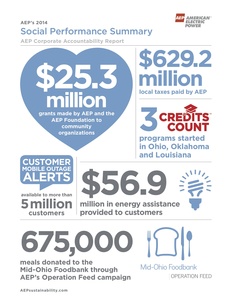 At AEP, being a responsible corporate citizen means supporting the communities where our employees and customers live and work. AEP employees provided thousands of hours of volunteer support for local organizations in 2014. In Central Ohio alone, AEP and the IBEW Local 1466 employees provided funding to the Mid-Ohio Foodbank for 675,000 meals.

Other 2014 social performance highlights include:

For more information, view the 2015 Corporate Accountability Report online or download the app in the iTunes store.

American Electric Power, based in Columbus, Ohio, is focused on building a smarter energy infrastructure and delivering new technologies and custom energy solutions to our customers. AEP’s more than 17,000 employees operate and maintain the nation’s largest electricity transmission system and...