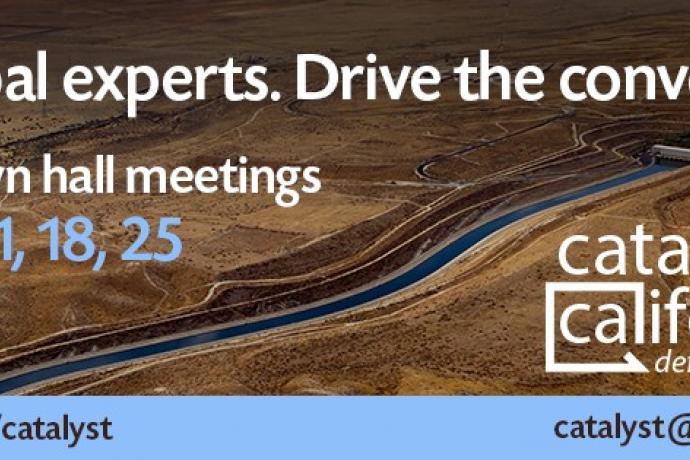 The series comes as California, the American West and the United States are facing an urgent test of civic and environmental resilience. Under stress, the state is developing blueprints for the nation and the world as it grapples with accelerating water crises.

California’s four-year drought — and a fickle El Niño —  is a 21st-century test for the state’s 39 million residents, its economy, and its environment. The hottest, driest period in state history is forcing regulators, water managers, farmers, city officials, and ordinary people to take unprecedented measures to ensure an adequate water supply for all.

Participants in the events will take part and help sort out the seminal trends that are shaping water's future, from Los Angeles and Sacramento, to India and Brazil. Circle of Blue uses convening technology from MaestroConference to create an interactive, radio show-like experience.

“In these unprecedented, disruptive times, this is the moment to assemble the most innovative, diverse voices, and act with the tenacity necessary to respond to California and the world's most persistent water challenges,” said J. Carl Ganter, managing director of Circle of Blue and member of the World Economic Forum Global Agenda Council on Water.

“We face converging global choke points at the intersection of water, food and energy that are causing billions of dollars of disruptions, testing human and ecological resilience, and requiring us to be much more nimble and responsive,” Ganter said. “It is only with systemic, creative, and collective thinking that we will find sustainable solutions.”

During the August 11, 18, 25, and future events, participants will explore:

Water: The top global risk
The World Economic Forum Global Risks Report 2015 ranks “water crises” as the planet’s most urgent issue of greatest potential impact. Water scarcity and supply are serious threats to people, business, the environment, and political stability across the world, including the United States.

This is the third in a series of virtual conference events on fast-unfolding situations, including the California drought, and part of Circle of Blue’s ongoing coverage of the competition between water, food and energy worldwide. Circle of Blue has reported in-depth from Mongolia, China, the Middle East, South America, the United States and Europe, covering issues that range from water pricing to groundwater stress. Ongoing global coverage is online at Circle of Blue http://www.circleofblue.org/waternews/

“What we learn here for drought stress – for nature and for people – are lessons for the world.”
— Brian Stranko, California Water Program Director, Nature Conservancy

“We must develop an example here for the world. Will it take another Dustbowl for Americans to start paying attention to water issues?”
— Upmanu Lall, Professor and Director of the Columbia University Water Center

“This may be the most important moment for water in the last 50 years.”
— Chuck Fishman, author, The Big Thirst

About Circle of Blue
Circle of Blue deploys its teams of leading journalists, photographers, data experts, field researchers, and designers to report from the front lines of the world’s resource crises, with a core focus on water. Circle of Blue received the Rockefeller Foundation Centennial Innovation Award for its breakthrough, feedback-loop model that combines on-the-ground reporting, data collection, analysis, design, and convening. Circle of Blue is a nonprofit affiliate of the Pacific Institute.