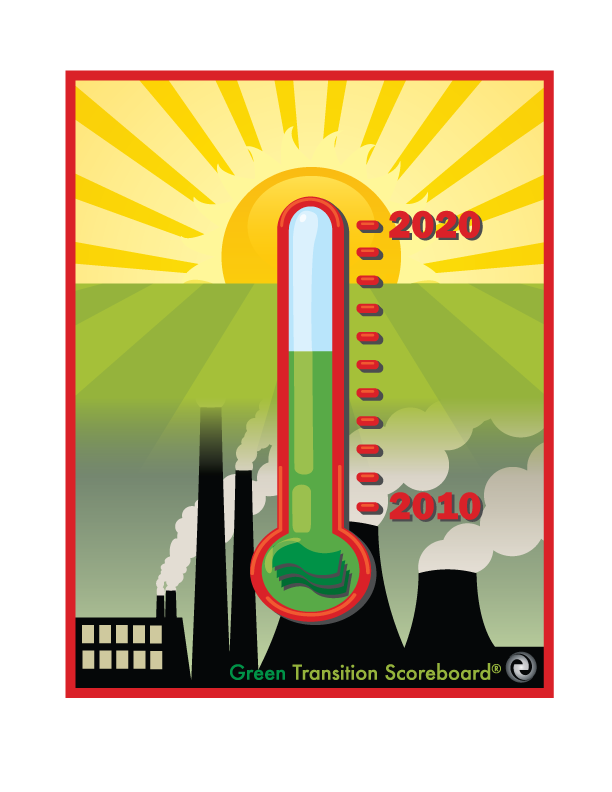 Earth Day 2015 marks $6.22 trillion invested in the global green transition since 2007.  This meets our Green Transition Scoreboard® (GTS) goal of $10 trillion privately invested in the green economy by 2020, easily on track to reach the 2020 goal to effectively scale innovations and reduce costs in green technologies as the world transitions to the Solar Age.

The GTS tracks Renewable Energy, Energy Efficiency, Life Systems, Green Construction and Corporate Green R&D, representing broad areas of investment in green technologies.  Each sector covers an area of substantial capital investment in technologies which Hazel Henderson's years of research as a science advisor and which the Ethical Markets Advisory Board expertise indicate are continuing to contribute to the growing green economy.

The upward trend in investments Ethical Markets Media has reported since 2009 aligns with the strategy to invest at least 10% of institutional portfolios directly in companies driving the global Green Transition, appropriately updating strategic asset allocation models both as opportunity and as risk mitigation.

The GTS definition of “green” strictly omits areas such as nuclear, clean coal, carbon capture and sequestration, and biofuels from feedstock other than sea-grown algae.  The GTS closely assess nanotech, genetic engineering, artificial life-forms and 3D printing on a case by case basis.

GTS data sources include, among many others, Bloomberg, Yahoo Finance, Reuters; new UN and other international studies; NASA and individual company reports.  Sources of financial data are screened by rigorous social, environment and ethical auditing standards. Companies in the GTS are tracked by indexes such as Calvert, Domini and Pax World, the PowerShares Cleantech Portfolio, MSCI, Dow Jones Sustainability Indexes, London's FTSE4GOOD, NASDAQ OMX Green Economy Global Benchmark Index, ASPI Eurozone, according to our Principles of Ethical Biomimicry Finance® and the many newsletters and stock reports from around the world we post daily at www.ethicalmarkets.com.

Hazel Henderson, founder and president of Ethical Markets, stated, “this report overviews the many systems now aligning to finance the inclusive, knowledge-rich, green economies, the next stage in human evolution.”

Renewable Energy – Growing strongly despite huge continued subsidies on fossil fuels and nuclear and scaling back on some projects.

Daniel Kammen, founding director of the Renewable and Appropriate Energy Laboratory, UC Berkeley, says of the report, “recognizing markets make terrible masters but potentially invaluable servants, the Green Transition Scoreboard® provides a strong argument that a diversity of practices can be used in the private sector to address pressing social needs in a the framework of sustainability.  It is vital to get this message in front of the private sector and all those who work with commercial enterprises in an era of environmental and social change.”