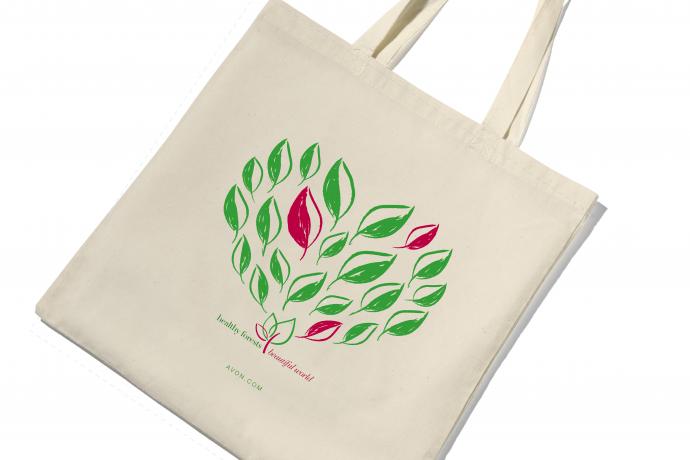 Today on Earth Day, Avon Products, Inc. [NYSE: AVP] announced that through 2014 the Avon Healthy Forests, Beautiful World global fundraising program has donated more than $7.5 million for global reforestation to The Nature Conservancy (TNC) and World Wildlife Fund (WWF). The program, which began in 2010, supports the rainforests in Brazil and Indonesia, two of the world’s most critically endangered ecosystems that play a crucial role in mitigating climate change, supporting biodiversity and providing for the health and economic well-being of millions of women, families and communities worldwide.

Beginning today in the United States, Avon will feature an Earth Day tote bag on Avon.com. Customers can purchase the tote bag, and if they spend $60 or more on Avon.com from April 22-24, they will receive a free Earth Day tote bag. Avon will make a $2 donation to the Healthy Forests, Beautiful World program for each bag sold or given.

The Earth Day tote bag is one of several special fundraising products Avon sells globally to raise funds for Healthy Forests, Beautiful World. With 6 million active independent Avon Sales Representatives around the world, Avon has a unique capacity to engage and mobilize people to help end deforestation, as it also does for the issues of breast cancer and violence against women. As a direct seller that relies on its brochure and printed materials, the issue of deforestation is especially important to Avon and the company is committed to ongoing improvement in its internal efforts and policies specific to sustainable sourcing, including the Avon Paper Promise and the Avon Palm Oil Promise.

Restoring Brazil’s Atlantic Forest
Since 2010, Avon has funded TNC’s Plant a Billion Trees program in one of the world’s most endangered and biodiverse rainforests—the Atlantic Forest in Brazil. Avon funding supports TNC and its partners in their goal to plant one billion trees by 2025 and has enabled the planting and protection of more than 4.5 million trees in three key locations in Brazil: the State of Espirito Santo State, Anhembi and Porto Feliz municipalities in the State of Sao Paulo. In 2014, Avon funding facilitated the restoration of 513 acres of forest in Brazil and the planting of 525,000 trees in the Espirito Santo State, resulting in the sequestration of approximately 63,000 tons of CO2.

Brazil’s Atlantic Forest is one of the most biodiverse ecosystems in the world, but it is also one of the most threatened. In recent decades, its forest cover has been severely degraded and today only 12 percent of this iconic forest remains. Local communities rely on these forests for clean, accessible water, protection from floods, and economic opportunities.  Restoration of the Atlantic Forest directly affects water source quality for 60 percent of Brazil’s residents, including people in major metropolitan areas.

“The Conservancy´s partnership with Avon helped ensure that 1,250,000 new trees and an additional 1,235 acres were restored in the Brazilian Atlantic Forest in 2014, adding to the year´s total of more than 8 million new native trees,” said Rubens Benini, TNC Restoration Strategies Coordinator. “The project supported by Avon falls within the Atlantic Forest Central Corridor, a region that covers three Brazilian states and has the highest biodiversity on the planet. With support from partners such as Avon, the Conservancy has restored a total of 23 million trees and more than 22,000 acres of forest since the Plant a Billion Tree Campaign began in 2008.”

Supporting Indonesia’s Tropical Forests
Since 2011, Avon has supported WWF’s New Trees program, a six-year reforestation program focused on community-based planting, monitoring and maintenance of more than 148,000 tree seedlings on five priority locations covering more than 370 hectares of degraded forests across the Indonesian islands of Borneo, Sumatra, Java and Lombok. These trees are estimated to absorb more than 6,000 tons of CO2 over the next 10 years.

Healthy Forests, Beautiful World funding currently supports conservation/restoration and community empowerment efforts in the Labian Leboyan Corridor project in the Heart of Borneo. This corridor, which includes significant biodiversity—including orangutans—connects Danau Sentarum National Park and Betung Kerihun National Park in West Kalimantan. The project complements the New Trees work and other projects supported by Avon in North and East Kalimantan that also provide habitat for orangutans, as well as and elephants.  The project benefits local livelihoods around these forest areas, which can reduce encroachment and drive greater success of forest rehabilitation.

“The future of the world’s forests depends greatly on the actions of Avon and other U.S. companies, given that the United States is one of the world’s largest producers and consumers of wood and paper products,” said Linda Walker, director of WWF’s Global Forest & Trade Network-North America. “U.S. companies can use their tremendous power to support responsible forestry and trade, as well as to eliminate the market for unsustainable and illegal wood. This is particularly needed in Indonesia, where the forests are fast disappearing. The New Trees Program, plus Avon’s responsible paper sourcing commitments and preference for FSC-certified paper, are key to saving forests in Indonesia and worldwide.”

Avon Products, Inc.
Avon is the company that for more than 125 years has stood for beauty, innovation, optimism and, above all, for women. With nearly $9 billion in annual revenue, Avon products are sold through 6 million active independent Avon Sales Representatives worldwide. Avon products include color cosmetics, skincare, fragrance, and fashion and home, featuring such well-recognized brand names as Avon Color, ANEW, Avon Care, Skin-So-Soft, and Advance Techniques. Learn more about Avon and its products at www.avoncompany.com.

World Wildlife Fund
WWF is one of the world’s leading conservation organizations, working in 100 countries for the past 50 years. With the support of almost 5 million members worldwide, WWF is dedicated to delivering science-based solutions to preserve the diversity and abundance of life on Earth, halt the degradation of the environment and combat climate change. Visit www.worldwildlife.org to learn more.

Avon Products, Inc. recognized the beauty of "corporate responsibility" nearly a century before the term became part of the cultural lexicon. From the very beginning, in 1886, forward-thinking Avon founder David H. McConnell committed his company "to meet fully the obligations of corporate citizenship by contributing to the well-being of society and the environment in which it functions" - words that still guide the company more than 125 years later.

Avon is committed to the mission to "do well by doing good," managing its business enterprise to the highest standards while leveraging its unique capacity to mobilize and engage people to be agents of change in their lives, communities and the world.