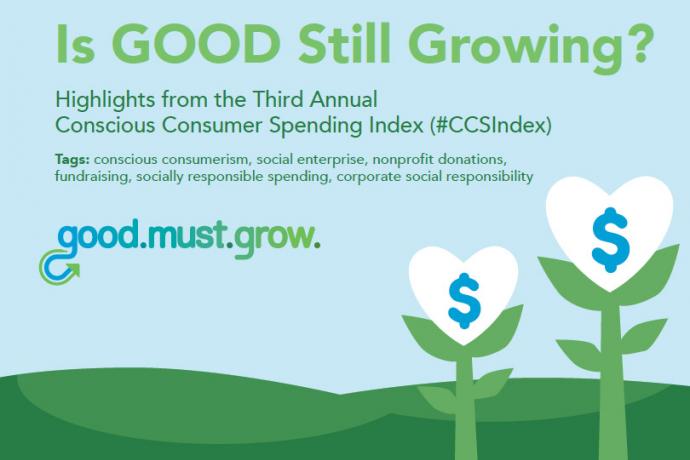 All signs point toward continued, albeit modest, growth in social enterprise and the number of Americans who are doing more good with their daily spending, according to the third annual Conscious Consumer Spending Index (#CCSIndex). In total, 1,021 Americans were polled this year for the ongoing benchmarking study, which is fueled by Good.Must.Grow. (GmG), a socially responsible marketing consultancy.

The 2015 study found that 32 percent of Americans are planning to spend more with companies who are socially responsible in the year ahead, up from 30 percent in 2014 and 29 percent in 2013. Additionally, 64 percent confirmed the importance of buying from socially responsible companies, up from 60 percent in 2013. Respondents also increased their belief in the importance of “being green” which was defined as recycling and favoring reusable products (87% in 2015, up from 83% in 2013) and reducing consumption, which included their overall consumer purchases (84% in 2015, up from 81% in 2013).

Despite the subtle progress over the past three years, there are causes for concern. Of those who planned to increase their socially responsible spending last year, 73 percent followed through, according to 2015 results. This is down from the previous year, which reported a success rate of 76 percent. Meanwhile there was no increase in the percentage of Americans who reported buying socially responsible products and services, compared to last year (65%).

Overall, the #CCSIndex score held steady at 68 on a 100-point scale (pulling even with 2014 and up from 65 in 2013). The #CCSIndex score is calculated by evaluating the importance consumers place on purchasing from socially responsible companies, actions taken to support such products and services, and future intent to increase the amount they spend with responsible organizations.

Gaps in knowledge continue to derail conscious consumers, as 46 percent stated that not knowing where to find socially responsible products and services prevented them from doing more good.

“Slow and steady may win some races, but if you look at the condition of the world around us, we are in a sprint, not a marathon,” said Heath Shackleford, founder of Good.Must.Grow. “So, while I think we can be excited to see consistent and continued growth in socially responsible behavior, we have to act with urgency to remove obstacles and speed up our progress.”

Charitable Giving Makes a Comeback in 2015

Nearly one quarter of Americans (24%), plan to increase their financial contributions to nonprofits in 2015, up from 18 percent in 2014. This increase is welcome news for charities after seeing a dip in this metric from 21 percent in 2013 to 18 percent in 2014. Based on previous years, consumers follow through on their charitable intentions, as survey results show more than a 100 percent success rate on planned increases the past two years. Also promising for nonprofits is that only 15 percent of respondents are planning to not financially support a cause in 2015, down from 19 percent who were planning to be uncharitable in 2013. Finally, 28 percent of those surveyed said they favored charitable contributions as a way to give back, up from 25 percent in 2014.

This year’s #CCSIndex added a top 20 “Good Company” poll, compiled by responses to the question, “Name one company or organization that is socially responsible.” Based on unaided recall by respondents, companies were ranked based on how frequently they were named. This year’s top 20 is an eclectic mix of organizations that includes well-known social enterprises, Fortune 500 brands and iconic nonprofits. Rankings are as follows:

Further supporting the knowledge gap between consumers and do good brands is the fact that almost 30 percent of respondents (28%) failed to name a socially responsible organization. It appears without concerted effort, that gap could widen. While consumers are more interested than ever in socially responsible products and services, they are doing less to proactively seek them out. When providing respondents with a list of various methods that can be used to determine if a company is socially responsible, the #CCSIndex findings indicate a slight decline (or no change) in seven out of eight research tactics over the last three years.

“It’s going to take a collective response from conscious companies and conscious consumers to turn this from an evolution into a revolution,” said Shackleford. “Better world businesses have to find ways to more effectively connect with individuals who want to do more good. At the same time, individuals who claim to be socially responsible need to take more responsibility for seeking out organizations that are committed to social impact.”

When provided a list of terms used to identify socially responsible goods and services, respondents were most familiar with claims such as organic, green and eco-friendly (82% apiece), local (79%), natural (74%) and sustainable (71%). Of these, local is the most likely to influence purchasing decisions. Of those who said they were familiar with the term “local”, nearly eight out of ten (77%) said that it has an impact on what they buy.

This study was conducted in partnership with Supportive Research Solutions and What They Think Research. Sampling was provided by Research Now. Data was collected February 2–15, 2015. In total, 1,021 Americans were surveyed. Margin of error is +/-3%. For more information on the Conscious Consumer Spending Index, please visit www.goodmustgrow.com/ccsindex

Good.Must.Grow. provides strategic marketing support for socially responsible businesses, nonprofit causes and organizations that are focused on health + wellness. We want to be part of a revolution that drives societal change by sparking increased charitable giving and community involvement as well as unprecedented levels of corporate social responsibility. Proud to be a Certified B Corp. See how we’re #GrowingGood at http://www.goodmustgrow.com.