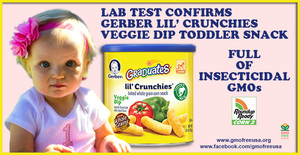 The agrichemical corporations that produce GMOs, together with Big Food, have spent millions in recent years to narrowly defeat citizens’ ballot initiatives for mandatory GMO labeling in California, Washington, Oregon and Colorado. Nestlé, Gerber’s parent company, has spent  $2.4 million to fund anti-labeling efforts. These industries say that GMOs are safe, that government regulatory bodies agree with them and labeling is unnecessary. But the FDA and EPA rely on industry funded voluntary safety assessments conducted by the same companies that profit from their sale. A recent statement published in a peer reviewed journal, signed by over 300 industry-independent scientists and scholars, stated that there is no scientific consensus on GMO safety.

In 2012, the American Academy of Pediatrics (AAP), issued a policy statement recommending that children’s exposure to pesticides be reduced. Yet Nestlé doesn’t have a problem with feeding babies genetically modified corn that is a pesticide regulated by the EPA.

"As a physician in Hawaii I remain gravely concerned about the impact pesticides and pesticide dependent crops have on our children's development,"  said Josh Green M.D., Hawaii State Senator.

Nestlé’s corporate head of sustainable agriculture, Hans Jöhr, previously stated, “We have a very simple way of looking at GM: listen to what the consumer wants. If they don't want it in products, you don't put them in.”

“American mothers are outraged that Nestlé continues to experiment on our babies with their Gerber brand. In response to consumer outcry, Nestlé removed GMOs from their baby and toddler foods in South Africa in 2013. Why not in America? The scientific evidence against GM foods is mounting,” says Diana Reeves, Executive Director of GMO Free USA and mother of three.

GMO Free USA is calling on Gerber to commit to removing GMO ingredients from all of their products and to enroll in the Non-GMO Project for third party verification.

GMO Free USA is a 501c3 nonprofit that educates consumers and other stakeholders about the potential hazards of GMOs and advocates for the removal of GMOs from the food supply. Visit http://www.gmofreeusa.org/food-testing/operation-label-gmos/ to learn more about GMO Free USA’s food testing program. Members of the press may contact Diana Reeves or Luan Van Le at 347.921.1466 or info@gmofreeusa.org