What does ASIMO, the world’s most advanced humanoid robot, do with a day off in the Big Apple? 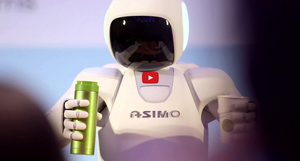 Join us for discussion on Twitter with Honda and its humanoid robot, ASIMO April 6 through 17th

Recently, ASIMO made waves when it made a North American Tour debut, starting in New York City.

3BL Media along with Honda would like to invite everyone interested in ASIMO, robots, technology and the future to join us in this two week conversation using the #ASIMO2015 hashtag, that leads up to the Society of Automobile Engineers (SAE) conference, April 21st in Detroit, MI where ASIMO will be present.

First introduced in 2000, ASIMO - which stands for Advanced Step in Innovative Mobility – was designed to help those in society that need assistance. In April of 2014, Honda introduced its newest edition of ASIMO during three days of media events that included a visit to the LIVE! With Kelly and Michael morning show and demonstrations at the New York Auto Show.

Movement has been improved, and with these updates ASIMO can now run faster, climb stairs more smoothly and transition seamlessly between walking, stopping and running. The latest generation of ASIMO can also hop, balance on one foot, sidestep and walk over uneven surfaces. All of these advancements gets ASIMO one step close to performing daily tasks to assist those in need.

Join 3BL Media (@3BLMedia) along with Honda’s team that supports ASIMO (@ASIMO) for a discussion about this advanced technology, other initiatives in progress and of course, about ASIMO’s NYC debut and a special appearance from UNI-CUB. This two-week long conversation on Twitter starts Monday April 6 and will discuss all things ASIMO, including:

Honda established operations in America in 1959, and now employs more than 26,000 associates in its U.S. sales, R&D and manufacturing operations with a capital investment of more than $12.5 billion.

Seven Honda auto plants in the region, including four in the U.S., have the capacity to produce 1.72 million automobiles each year.  In 2012, 90 percent of the Honda and Acura automobiles sold in the U.S. were produced in North America.

Honda operates major research and development centers in the U.S. that fully design, develop and engineer many of the products Honda produces in North America.

Honda introduced the first version of ASIMO, the world’s most advanced, bi-pedal humanoid robot, in 2000, after 14 years of research on humanoid robotics. Honda created ASIMO to help people and society, to create a helpmate for humans quiring assistance with their daily lives.

The small, lightweight robot is designed to operate fluidly in a human environment, and is capable of walking, running, climbing and descending stairs, avoiding objects, and recognizing human faces, among other skills.

The new version of ASIMO is 4’3’’ tall (130 cm), weighs 110 lbs (50 kg), and is made of magnesium alloy, plastic resin and other materials. ASIMO runs on a rechargeable lithium ion battery, with an approximate operating time of 40 minutes before recharging.

Previous versions of ASIMO have entertained people around the United States, while showcasing its innovative technology, including ringing the opening bell on the New York Stock Exchange, conducting the Detroit Symphony Orchestra, walking the red carpet at a Hollywood movie premiere, and in regular appearances at Disneyland.