At least 57 Amur leopards now exist in Russia’s Land of the Leopard National Park, up from just 30 cats counted in 2007, according to new census data announced last week. 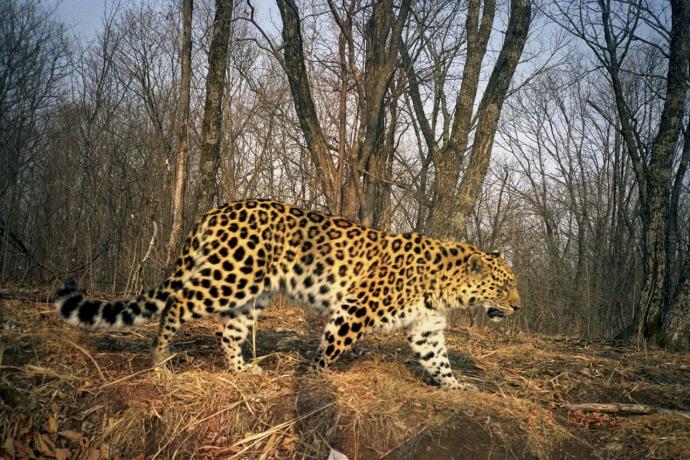 At least 57 Amur leopards now exist in Russia’s Land of the Leopard National Park, up from just 30 cats counted in 2007, according to new census data announced last week. An additional 8 to 12 leopards were counted in adjacent areas of China, meaning the number of Amur leopards, a rare subspecies considered the world’s rarest wild cat, has more than doubled over the past seven years.

The census - taken with camera traps spread out over more than 900,000 acres of primary leopard habitat - collected around ten thousand photographs which scientists used to identify nearly 60 individual animals, judging by the distinctive pattern of spots on the leopards’ fur. The census was carried out by the Land of the Leopard National Park jointly with the Far Eastern Branch of the Russian Academy of Sciences, with the support of The Amur Leopard Center and WWF-Russia.

“Such a strong rebound in Amur leopard numbers is further proof that even the most critically endangered big cats can recover if we protect their habitat and work together on conservation efforts” said Dr. Barney Long, who leads Asian species conservation for World Wildlife Fund (WWF) in the US. “There’s still a lot of work to be done in order to secure a safe future for the Amur leopard, but these numbers demonstrate that things are moving in the right direction.”

Land of the Leopard National Park, which includes all of the Amur leopard’s known breeding areas, was hailed as a lifeline to the critically endangered cat when established in 2012. The park extends across nearly 650,000 acres, and is also home to the endangered Amur tiger.

According to Yury Darman, head of WWF Russia Amur Branch and a member of the Supervisory Board of The Amur Leopards Center, "The national park became the main organizational force for leopard protection and research.”

Conservationists are working towards monitoring leopard populations across the border in neighboring Chinese nature reserves. One of the highly anticipated next steps would be the establishment of a Sino-Russian transboundary nature reserve.

Coincidentally, the announcement comes the same week WWF released rare video footage from China of a family of endangered Amur tigers in the same habitat favored by the critically endangered Amur leopards.

About World Wildlife Fund
WWF is one of the world’s leading conservation organizations, working in 100 countries for over half a century. With the support of almost 5 million members worldwide, WWF is dedicated to delivering science-based solutions to preserve the diversity and abundance of life on Earth, halt the degradation of the environment and combat climate change. Visit www.worldwildlife.org to learn more and follow our news conversations on Twitter @WWFNews.