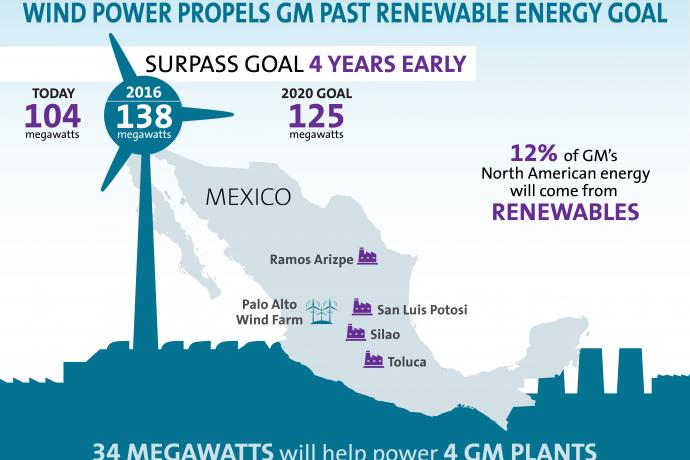 General Motors for the first time is procuring wind to power its manufacturing operations, enabling one of its Mexico facilities™ electricity needs to be run mostly on renewable energy. This addition of 34 megawatts of wind power allows GM to achieve it

General Motors for the first time is procuring wind to power its manufacturing operations, enabling one of its Mexico facilities’ electricity needs to be run mostly on renewable energy. This addition of 34 megawatts of wind power allows GM to achieve its corporate goal of renewable energy use four years early.

Construction of the wind farm begins in the second quarter of this year. When complete, more than 12 percent of GM’s North American energy consumption will come from renewable energy sources, up from 9 percent  The company’s current renewable energy use – comprised of solar, landfill gas and waste to energy – totals 104 megawatts against a goal of 125 megawatts by 2020. The use of clean energy reduces greenhouse gas emissions and GM’s impact on climate change.

Seventy-five percent of the energy coming from the wind turbines will power most of GM’s Toluca Complex sitting on 104 acres, making it the company’s largest user of renewable energy. The remaining capacity will help power its Silao, San Luis Potosi and Ramos Arizpe complexes. The use of renewable energy helps these facilities avoid nearly 40,000 tons of carbon dioxide emissions annually.

“Our commitment to sustainable manufacturing processes is one way we serve and improve the communities in which we work and live,” said Jim DeLuca, GM executive vice president of Global Manufacturing. “Using more renewable energy to power our plants helps us reduce costs, minimize risk and leave a smaller carbon footprint.”

GM signed a power purchase agreement with Enel Green Power, which is developing and constructing a massive wind farm in Palo Alto, Mexico. The company’s use of 34 megawatts of energy is equivalent to the power produced by 17 wind turbines.

“Mexico is an ideal location for our first wind project,” said Rob Threlkeld, GM global manager of renewable energy. “Energy is fed to a national grid, making it easier to reduce or add energy capacity at a facility. There’s also a good business case as prices for traditional power are about a third greater than the United States.

“Once online, we’ll evaluate the project to better understand how we can expand the use of wind power.”

GM is a founding member of the Business Renewables Center, a collaborative platform launched earlier this month by the Rocky Mountain Institute. The center aims to accelerate corporate renewable energy procurement with a goal of nearly doubling U.S. capacity of wind and solar energy by 2025. It is part of a larger effort – the Corporate Renewables Partnership – that includes the World Wildlife Foundation, the World Resources Institute and the Business for Social Responsibility. The Renewable Energy Buyers’ Principles, of which GM is a signatory, set a framework for the partnership and guides the Business Renewables Center.