Women In The Agricultural Supply Chain

Women play a major role in agriculture, as farmers and through their work on family-owned farms. 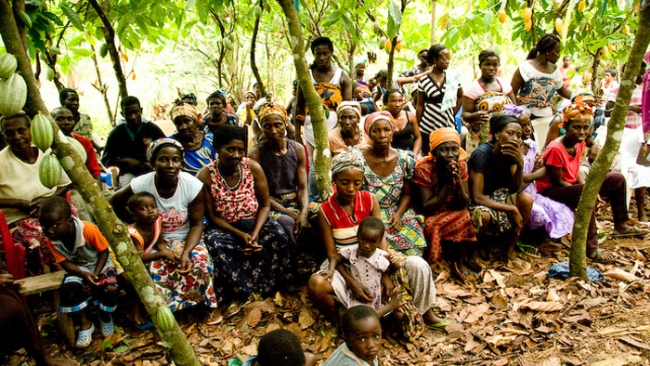 Their contribution is vital to growing important Mars crops, such as coffee, tea and cocoa, where women can provide up to 45% of the labor and frequently face discrimination.

Empowering women in agriculture will build stronger communities, better quality of life for farmers, and more sustainable and resilient supply chains. Research shows that women are more likely to spend additional income on things that assist family members and ultimately help the community as a whole, including food, healthcare, and education for their children. Mars believes that there is a strong business and community development case for empowering women cocoa farmers.

Mars’ gender work is based on an extensive assessment undertaken to evaluate the business case for supporting women’s rights. In the cocoa sector in particular, women often face challenges related to time-poverty, marginalization, unequal distribution of responsibilities and discrimination. Mars Chocolate recognizes that women are seldom considered as cocoa farmers even though they make up nearly half the labor force.

The assessment identifies specific inequalities faced by women producers, including:

Mars Chocolate’s Vision for Change (V4C) project in Côte d’Ivoire, was initiated in 2010. It is helping cocoa farmers improve their quality, yields and incomes, and is engaging with cocoa communities to promote social development and improved conditions. The Mars Chocolate Gender Action Plan, which entered its second phase in 2014, was put in place to better address gender issues into existing V4C work.

V4C’s gender-related activities strengthen the role of women in cocoa communities through the transfer of knowledge, skills and opportunities. These include:

To measure the success of V4C, it is crucial to know how many women have been reached. Improved monitoring and evaluation of women in the cocoa supply chain is a key part of the Gender Action Plan, and is helping to strengthen the program.

In September 2014, we organized a high-level stakeholder event to discuss the root causes and impacts of gender issues faced by women farmers in the cocoa supply chain in West Africa, including access to education, land rights and cultural inequalities.

The event was led by Mars President Grant Reid and Chairman of the Board Victoria Mars, and chaired by UK Secretary of State for International Development, Justine Greening.

The discussions centered on the challenges faced by women farmers, including cultural biases, technological barriers, funding gaps, and poor education and health. This provided Mars Associates with an opportunity to listen to and learn from senior politicians, industry leaders and civil-sector innovators with expertise and experience of these issues. We also explored opportunities for global organizations such as Mars to drive best practice solutions.

In May 2014, Mars Chocolate pledged its support for the CocoaAction strategy, which are enabling 300,000 farmers in Ghana and Côte d’Ivoire to increase their agricultural productivity by 2020. The success of CocoaAction will be measured against six key performance indicators, broken down by gender, and will include the number of women in leadership positions.