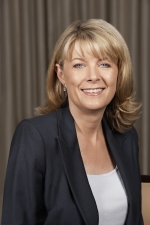 Two top executives at MGM Resorts International (NYSE: MGM) have been recognized for their contributions in diversity, philanthropy and sustainability.

Phyllis A. James, Executive Vice President, Special Counsel-Litigation and Chief Diversity Officer for MGM Resorts International, has been named one of 2014’s most influential women in corporate America by Savoy Magazine.

Cindy Ortega, Chief Sustainability Officer and Senior Vice President for MGM Resorts International, was named one of the 10 most powerful women in sustainability by Green Building & Design.

“These honors demonstrate the effect that both Phyllis and Cindy have had in CSR, not just for our company but for the fields of diversity, philanthropy and sustainability,” said Jim Murren, Chairman and CEO of MGM Resorts.

Ms. Ortega was recognized by GB&D along with Hilary Clinton, former U.S. Secretary of State and First Lady; Arielle Bertman, Principal of Energy and Sustainability for Google; Bea Perez, Chief Sustainability Officer for Coca-Cola, and others.

As Chief Litigation Counsel, Ms. James is responsible for supervision of company litigation, including inside and outside litigation counsel management and litigation reporting. In her role as Chief Diversity Officer, she leads all aspects of MGM Resorts' Diversity and Inclusion Initiative, as well as the company's Philanthropy & Community Engagement programs. Ms. James joined MGM Resorts in March 2002.

Ms. Ortega is responsible for the oversight and achievement of the LEED certification at the $8.5 billion dollar CityCenter Project in the heart of the Las Vegas Strip. Under her guidance, six developments at CityCenter were awarded LEED Gold certifications, making it the largest single Gold certified new construction project in the world. Through her leadership, passion, thoughts and contributions, Ms. Ortega has led MGM Resorts International to develop the comprehensive Green Advantage platform, execute strategies for environmental sustainability and shape partnerships on a local, national and international scale.

This is the first year that GB&D has issued this award. Its efforts are a direct response to the call to action Hillary Clinton put forth at Greenbuild 2013, to continue making a place for women in sustainability roles and to continue sharing success stories in order to educate the public. This honor was given to celebrate women in sustainability, promote the sharing of best practices across industries, and raise the profile of sustainability leadership across the globe. The full list of recipients can be viewed in the October/ November issue of GB&D or online: http://gbdmagazine.com/2014/30-women-in-sustainability/.

Selection of the Top Influential Women in Corporate America begins by examining the landscape of spheres of influence impacting Savoy’s readership including: corporate sector influence, scholastic achievement, career growth, community outreach and recognition. The information received from over 500 prospective candidates in diverse fields was pre-screened by the selection committee, which included the Savoy editorial board and community leaders with representatives from the academic and business arenas. The committee reviewed information on executives in human resources, information, real estate, finance, investment banking, diversity, foundations, procurement, business development, marketing, sales, health care, manufacturing and the legal field. The number of candidates was narrowed to the 2014 Top Influential Women listing based upon their exemplary record of accomplishments and influence while working to better their community and inspire others.

About MGM Resorts International
MGM Resorts International (NYSE: MGM) is one of the world's leading global hospitality companies, operating a portfolio of destination resort brands including Bellagio, MGM Grand, Mandalay Bay and The Mirage. The Company is in the process of developing MGM National Harbor in Maryland and MGM Springfield in Massachusetts.  The Company also owns 51 percent of MGM China Holdings Limited, which owns the MGM Macau resort and casino and developing a gaming resort in Cotai, and 50 percent of CityCenter in Las Vegas, which features Aria resort and casino. For more information about MGM Resorts International, visit the Company's website at www.mgmresorts.com.

MGM Resorts International (NYSE: MGM) is one of the world's leading global hospitality companies, operating a peerless portfolio of destination resort brands, including Bellagio, MGM Grand, Mandalay Bay and The Mirage. In addition to its 51% interest in MGM China Holdings, Limited, which owns the MGM Macau resort and casino and is in the process of developing a gaming resort in Cotai, the Company has significant holdings in gaming, hospitality and entertainment, owns and operates 15 properties located in Nevada, Mississippi and Michigan, and has 50% investments in three other properties in Nevada and Illinois. One of those investments is CityCenter, an unprecedented urban resort destination on the Las Vegas Strip featuring its centerpiece ARIA Resort & Casino. Leveraging MGM Resorts' unmatched amenities, the M life loyalty program delivers one-of-a-kind experiences, insider privileges and personalized rewards for guests at the Company's renowned properties nationwide. Through its hospitality management subsidiary, the Company holds a growing number of development and management agreements for casino and non-casino resort projects around the world.

MGM Resorts International supports responsible gaming and has implemented the American Gaming Association's Code of Conduct for Responsible Gaming at its gaming properties. The Company has been honored with numerous awards and recognitions for its industry-leading Diversity Initiative, its community philanthropy programs and the Company's commitment to sustainable development and operations. For more information about MGM Resorts International, visit the Company's website at www.mgmresorts.com.

Connect with MGM Resorts International on: