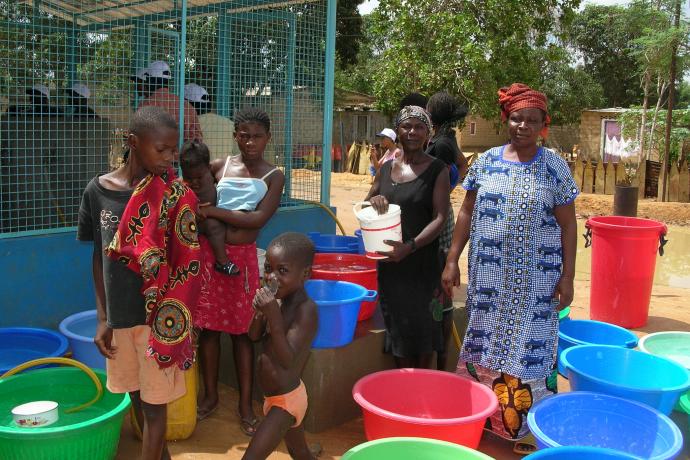 Children gather to bathe in safe water in a peri-urban area near Luanda, Angola.

The Coca-Cola Company and its African bottling partners today announced a new investment of US$5 billion during the U.S.-Africa Leaders Summit here.  The investment, to be made over the next six years, increases its total announced investment in Africa to $17 billion from 2010 to 2020.  The Company and its bottling partners anticipate that this investment will fund new manufacturing lines, cooling and distribution equipment and production; create additional jobs and opportunities across Coca-Cola’s African supply chain; and support key sustainability initiatives and programs focused on safe water access, sustainable sourcing, women’s economic empowerment, community well-being and operational efficiency improvements.

“As an organization that has been part of the economic and social fabric of Africa since 1928, we and our local bottling partners have seen, firsthand, the great promise and potential of this dynamic, growing and vibrant continent,” said Muhtar Kent, Chairman and CEO of The Coca-Cola Company.  “Even as we see tremendous growth potential in Africa, we know that the strength and sustainability of our business are tied directly to the strength and sustainability of the African communities we proudly serve.”

The Company has also signed a Letter of Intent to launch Source Africa, an initiative to secure more consistent and sustainable local ingredient sourcing for its products in partnership with the New Alliance for Food Security and Nutrition and Grow Africa.  The initiative will initially focus on sustainable mango and tea production in Kenya; citrus, mango and pineapple production in Nigeria; and mango in Malawi.  Longer-term, the program could expand to focus on sustainable ingredient production in Ethiopia, Senegal, Tanzania and Mozambique.  Source Africa builds on the experience of Coca-Cola’s work in sustainable agriculture, including Project Nurture, an $11.5 million partnership supporting 50,000 small-scale fruit farmers in East Africa to sustainably grow their crops and income.

Kent added, “As a business, we’re committed to creating public value and helping our communities overcome development challenges.  In Africa, we believe we can do more to source agricultural ingredients locally, with significant supply potential that’s underdeveloped and underutilized.  Tapping this potential could accelerate the growth of our business and Africa’s emerging economies, making our supply chains more cost effective and enabling sub-Saharan Africa to supply more ingredients to growing markets in Africa and beyond.”

At the Summit, Kent also announced that The Coca-Cola Africa Foundation (TCCAF) will expand its Replenish Africa Initiative (RAIN) through 2020 to support Pan-African safe water access and sanitation programs for an additional 4 million African people.  This new expansion adds to TCCAF’s original RAIN commitment to bring safe water access to 2 million people across the continent by 2015.

Through the RAIN program expansion, TCCAF and its public and private partners will work to improve sustainable safe water access for 6 million Africans; economically empower up to 250,000 women and youth; promote health and hygiene in thousands of communities, schools, and health centers; and return up to 18.5 billion liters of water to nature and communities.

To date, TCCAF has made investments and collaborated with more than 140 partners to reach 2 million people with sustainable, safe water access across at least 37 of Africa’s 55 countries by the end of 2015.

The Company and its Foundations also remain committed to other programs focused on improving community well-being and women’s economic empowerment in Africa, including:

The Coca-Cola Company (NYSE: KO) is the world's largest beverage company, refreshing consumers with more than 500 sparkling and still brands.  Led by Coca-Cola, one of the world's most valuable and recognizable brands, our Company's portfolio features 17 billion-dollar brands including Diet Coke, Fanta, Sprite, Coca-Cola Zero, vitaminwater, Powerade, Minute Maid, Simply, Georgia and Del Valle. Globally, we are the No. 1 provider of sparkling beverages, ready-to-drink coffees, and juices and juice drinks.  Through the world's largest beverage distribution system, consumers in more than 200 countries enjoy our beverages at a rate of 1.9 billion servings a day.  With an enduring commitment to building sustainable communities, our Company is focused on initiatives that reduce our environmental footprint, support active, healthy living, create a safe, inclusive work environment for our associates, and enhance the economic development of the communities where we operate.  Together with our bottling partners, we rank among the world's top 10 private employers with more than 700,000 system associates.  For more information, visit Coca-Cola Journey at  www.coca-colacompany.com, follow us on Twitter at twitter.com/CocaColaCo, visit our blog, Coca-Cola Unbottled, at www.coca-colablog.com or find us on LinkedIn at www.linkedin.com/company/the-coca-cola-company.