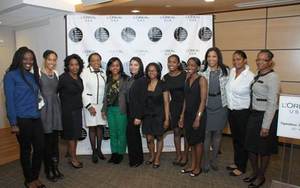 NEW YORK, May 28 /CSRwire/ - L’Oréal USA celebrated its 15th anniversary of providing support for the New York Coalition of One Hundred Black Women’s Role Model Program with four days of presentations and workshops culminating in the award of scholarships.

The New York Coalition of One Hundred Black Women (NYCOBW) celebrated its 35th Anniversary presenting the Role Model Program, an initiative that allows young women to learn practical workplace skills and to shadow professional women in their chosen careers for one week during spring semester break.

“L'Oréal USA is at the forefront of creating and supporting programs that empower women and girls. Since 1999, we have partnered with the New York Coalition of One Hundred Black Women to support the Role Model program. Our initial grant enabled the program to expand its reach beyond the borough of Manhattan, into Brooklyn and Queens, to students of Medgar Evers College and Queens College. We are pleased to celebrate fifteen years of sustaining a program that has positively affected the lives of hundreds of college and now high school students throughout New York,” said Antoinette Hamilton, L’Oréal USA’s Assistant Vice President of Diversity & Inclusion.

“Today, through our 15-year partnership, we are proud to have contributed more than $320,000 to the Role Model program including more than $15,000 in grants and scholarships awarded annually to program participants,” Ms. Hamilton noted.

"The Role Model Program, now in its 35th year, is a shining example of the impact that mentoring has on the lives and career successes of those who participate in programs such as ours. Past participants in our program regularly share with us the significant impact our program has had on their personal and professional development," said Avalyn Simon, President of the New York Coalition of One Hundred Black Women.

Throughout the week, L’Oréal USA hosted workshops and presentations, a highlight of which was “Have A Beautiful Day,” a skincare, hair care and make-up presentation by professionals from L’Oréal USA brands Mizani and Maybelline Garnier consisting of mini-makeovers on the students, demonstrating great skin care as well as ‘how-to’ tips on creating a beautiful work look and extending the look into the evening.

The featured speaker of the evening was Demeatria Boccella, Founder & Artistic Director / FashionAFRICANA, an annual production she created as a vehicle and voice for broadening the standard of beauty and cultivating a more life-giving and globally aware approach to African-inspired fashion and culture.

As curator of GLAMAZONIA by Mario Epanya, Boccella collaborated with Cameroon-born and Paris-based fashion photographer Mario Epanya to present the multi-media exhibition - which features images of Black women with African-inspired hairstyles, garments, and accessories, and offers testament to African beauty.

Ms. Boccella co-presented with Antoinette Hamilton on “The Beauty of Identity,” asking the participants to define beauty for themselves. As a part of the program, the students attended a specially curated "pop-up" exhibit of GLAMAZONIA created especially for the Have A Beautiful Day evening, featuring the work of Mario Epanya and created ‘Beauty Boards’ illustrating their personal interpretations of beauty.

On day one the students were greeted by 2013 Role Model alumna and scholarship winner Carlene Bobb, a student at John Jay College of Criminal Justice; the young women got Dress for Success tips from Stephanie Grigg and Money Management tools from Coalition member and financial advisor, Monica Noel. The evening culminated in a 2-hour, hands-on demonstration of Dining Etiquette facilitated by L’Oréal’s Aleksander Kiprovski, Director of Food Services.

The Closing Ceremony and Scholarship Presentation for the 35th Anniversary Role Model Program celebrating the 15th Anniversary of L’Oréal USA’s partnership featured Sonia S. Pearson, SPHR , CUNY Executive Director of Human Resources, who spoke about “How to Impress a Potential Employer by Highlighting Your Strengths.”

Pearson said that many of the issues that disqualify candidates for employment are things that are repeatedly stressed, but often overlooked. For example, she said that it is important to submit a well-organized and thoroughly edited resume that shows that the applicant knows what the employer is looking for and how she/he can contribute.

Role Model Essay winners among the high school students were:

“I want my prize to go back into the Coalition. That will be my way of being a part of this organization because I believe so deeply in what you are doing and the message you are sending the young girls,” said Hjordy’s Perez-Matos, first place college scholarship recipient.

Two recipients, Simone Michelle Jackson from CCNY and Simmone Isaac from John Jay College of Criminal Justice, were awarded the Evelyn Payne Davis Scholarship – named in honor of one of the Coalition’s founders and first President and awarded to students who have had to overcome many obstacles in their educational pursuit.

The college students were selected from City College of New York (CCNY), LaGuardia Community College, Medgar Evers College, Queens College, York College and John Jay College of Criminal Justice. The high school students attended the Women’s Academy of Excellence in the Bronx or are members of the Xinos Group of the National Sorority of Phi Beta Kappa in Queens.

New York Coalition of One Hundred Black Women
The New York Coalition of One Hundred Black Women is a non-profit organization addressing social, economic, political, cultural and other issues of concern to Black women in the five boroughs of New York City and beyond. The organization is dedicated to improving the quality of life for its members, their children and extended families, as well as in local communities and the larger city, state and nation. For more information about the organization go to www.cobwfounders.org or contact the NYCOBW Executive Offices at 208 East 79th Street, Suite 250A, New York, NY 10021, 212-517-5700.

A worldwide leader in the cosmetics industry, L'Oréal develops innovative products to meet the diverse needs of customers in 130 countries worldwide. Over 3,000 people work in the Group's 14 research centers, located in France, Asia and America. Their findings are responsi...