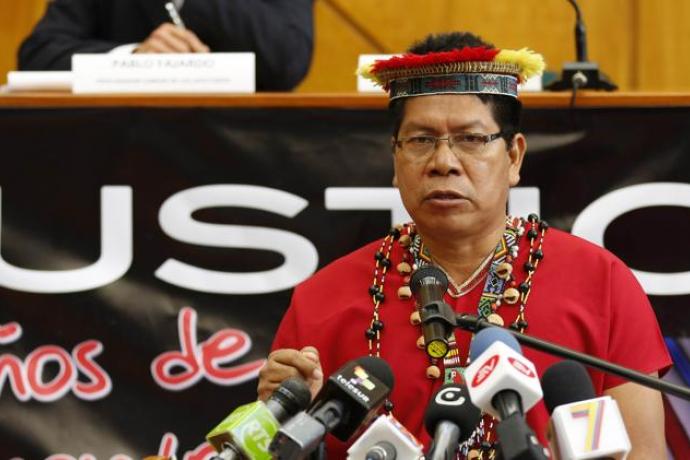 On Wednesday, May 28 at 8 a.m., Chevron’s Annual Shareholder’s Meeting will take place at the Petroleum Museum in Midland, Texas, where Ecuadorian indigenous and advocacy groups will gather outside the museum to ask the oil giant to stop running away from justice and face its responsibility for the massive oil contamination it caused in the Amazon rainforest.

Interview and photo opportunities with the Ecuadorian indigenous affected by Chevron’s contamination.

Environmentalists, human rights advocates, corporate accountability groups, and Ecuadorian indigenous will join Robinson Yumbo of the Cofan tribe and Humberto Piaguaje of the Secoya tribe, who represent the affected communities, to rally outside the Midland Petroleum Museum to condemn the retaliation campaign that Chevron has launched against the victims of the company and do the right thing by cleaning up the pollution that its predecessor, Texaco, caused systematically and deliberately during decades of oil exploitation in the Ecuadorian rainforest. Chevron-Texaco used substandard, and illegal oil production methods to save money when it operated in Ecuador. The company has spent hundreds of millions of dollars in endless legal subterfuges and public relations efforts to subdue the Ecuadorian victims and its advocates in order to avoid its moral and legal responsibility.

WHAT:
Rally for justice in Ecuador against Chevron’s abuses and deliberate contamination in the Amazon rainforest.

Background
In 1993, a group of Ecuadorian citizens of the Amazon region filed a class action lawsuit in a U.S. federal court against Texaco alleging that between 1964 and 1992 Texaco’s oil operations polluted the rainforest and rivers in Ecuador, resulting in a massive damage to the environment and the health of the indigenous people and farmers who lived in the area. Throughout 9 years, Chevron fought to move the case to Ecuador, and in 2002 the U.S. federal court dismissed the case on the grounds of forum non conveniens, stating that Ecuador was the appropriate venue for litigating these claims. As a condition for the dismissal, Chevron-Texaco agreed to comply with the Ecuadorian verdict, whichever this may be.

After a decade of litigation, the Ecuadorian court issued a $9.5 billion ruling against Chevron, which was ratified by the highest court in Ecuador in 2013. Shortly before the lower court ruling was handed down in 2011, Chevron launched an unprecedented retaliation campaign against the Ecuadorian villagers, their lawyers and any person or entity that directly or indirectly helped the Ecuadorians. In addition, the company has engaged in a relentless campaign to damage the reputation of Ecuador and its government, using attorneys, international arbitration panels, lobbying firms, politicians and government officials to coerce the Ecuadorian government into blocking the judgment or intervening in the Ecuadorian legal system in Chevron’s favor.