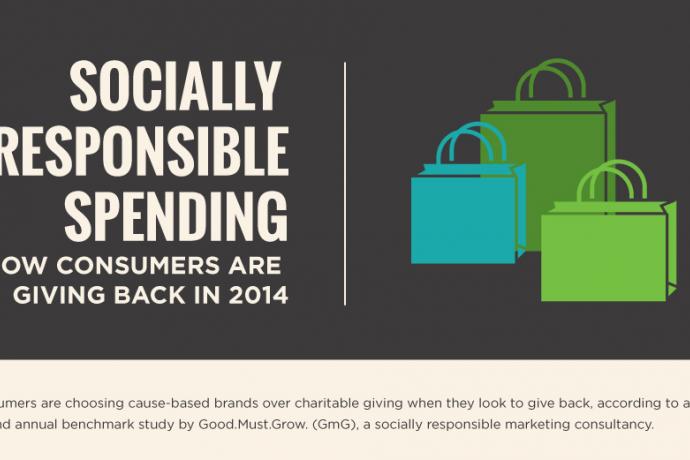 Consumers are choosing cause-based brands over charitable giving when they look to give back, according to a second annual benchmark study by Good.Must.Grow. (GmG), a socially responsible marketing consultancy.

One in five consumers (19%) said they prefer to “give back” by purchasing socially responsible products, while another 39 percent preferred to split their giving between charities and cause-based brands. When asked to select reasons for preferring socially responsible purchases over charitable contributions, more than half (52%) said it was an easier way for them to give back consistently. Just under half (48%) also reported it was a more effective way to support positive change or make a difference.

“The line between charity and commerce is blurring for many consumers, thanks to increasing opportunities for socially responsible spending,” said Heath Shackleford, founder of Good.Must.Grow. “As a result, forward-thinking causes should be evaluating whether they can diversify their organizations so they aren’t solely dependent upon grants and donations.”

All signs point to continued momentum for brands that are centered on social impact. In addition to the planned increase in responsible spending, 29 percent of those surveyed said they avoided buying products from a company specifically because it wasn’t socially responsible. This is up from 25 percent who reported the same activity in 2013.

“The Good.Must.Grow. research shows that we need to be doing even more to celebrate and promote people who are using business as a force for good,” said Jay Coen Gilbert, co-founder of B Lab, the nonprofit organization that certifies B Corporations and governs the B Impact Assessment. “As a community, we have to speak with one, unified voice to make socially responsible products and services easier for consumers to identify and support.”

Conscious Consumer Spending Index On the Rise
Overall, GmG saw the Conscious Consumer Spending Index (#CCSIndex) climb slightly to 68 on a 100-point scale, up from 65 in 2013. The #CCSIndex is a score calculated by evaluating the importance consumers place on purchasing from socially responsible companies, actions taken to support such products and services, and future intent to increase the amount they spend with responsible organizations.

But as in last year’s report, even the most altruistic consumers are susceptible to a good deal. More than half (52%) said they would be more likely to purchase a product from a store that offered them a “buy one get one” special, versus a store making a donation to charity on their behalf (22%) or a store giving away the same product they purchased to those in need (18%).

About the Survey
This study was conducted in partnership with Supportive Research Solutions and What They Think Research. Sampling was provided by ResearchNow. Data was collected February 20 – May 10, 2014. In total, 1,010 Americans were surveyed. Margin of error is +/-3%. For more information on the Conscious Consumer Spending Index, please visit www.goodmustgrow.com/ccsindex.

About Good.Must.Grow.
Good.Must.Grow. provides strategic marketing support for socially responsible businesses, nonprofit causes and organizations that are focused on health + wellness. We want to be part of a revolution that drives societal change by sparking increased charitable giving and community involvement as well as unprecedented levels of corporate social responsibility. Proud to be a Certified B Corp. See how we’re #GrowingGood at www.goodmustgrow.com.