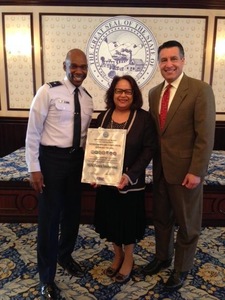 CARSON CITY, Nev., Apr. 02 /CSRwire/ - MGM Resorts International (NYSE: MGM) is one of the state’s most supportive employers for members of the military Guard and Reserve, according to the Employer Support for the Guard and Reserve, a Department of Defense office. The company today received the Extraordinary Employer Support award during a special breakfast ceremony with Gov. Brian Sandoval.

The recognition is awarded to companies that demonstrate sustained support of military service members. It is Nevada’s highest military honor awarded by the Department of Defense through its ESGR office. Any Guard or Reserve member can nominate their employer for the award.

“When I learned about the programs that MGM Resorts offers to veterans, I was amazed,” said Ondra Berry, the company’s Vice President of Diversity and Inclusion. He is also a brigadier general in the Nevada Air National Guard and nominated MGM Resorts for the award. “Then when I learned that the company continues to pay the salary of employees who are deployed, I knew I had to nominate MGM Resorts as an Extraordinary Employer. That kind of military support is rare in the business world.”

Phyllis A James, Executive Vice President and Chief Diversity Officer for MGM Resorts, will also receive the Patriot Award, an honor given to individual supervisors who have shown exemplary support of their employees who serve in the Guard and Reserves.

“She has been phenomenal,” said Brig. Gen. Berry. “When it comes to employees and their military service, her mantra is ‘whatever they need.’  She is the model of what a supervisor of a military member should be.”

MGM Resorts has several programs that target veterans or members of the Guard and Reserves. In 2012, the company started Boots to Business in partnership with the American Red Cross. The program is designed to employ veterans who are transitioning back to the civilian world after leaving the military. Salute to the Troops is an annual event in which dozens of Wounded Warriors are treated to a complimentary Veterans Day weekend at an MGM Resorts property. A variety of events are planned for the Wounded Warriors, including softball games, dinners, shows and other outings.

MGM Resorts recently created an employee Veterans Network Group in an effort to further engage employees who are veterans or current members of the Guard and Reserve. The group meets monthly to provide military employees with professional development training, networking opportunities and exposure to high-level executives.

Also, in support of employees who are called into active duty, MGM Resorts provides eligible employees with supplemental pay and benefits during a combat tour for a declared military action. The company continues all benefits coverage for employees who take a Military Leave of Absence. This applies to medical, dental and vision for the employee and his/her dependents. Employees have the ability to opt out of benefits coverage after the first 30 days of military leave from their jobs.

“Our company is proud of our employees who have served our country. They provide a critical service to this nation and we are eternally grateful. That’s why the company is committed to supporting them, whether it’s during a deployment or after they have completed their service,” said Jim Murren, Chairman and CEO of MGM Resorts. “We hope that, through this award, MGM Resorts inspires other companies to show their support of veterans and members of the Guard and Reserve.”

About ESGR
ESGR, a Department of Defense office, seeks to foster a culture in which all employers support and value the employment and military service of members of the National Guard and Reserve in the United States. ESGR facilitates and promotes a cooperative culture of employer support for National Guard and Reserve service by developing and advocating mutually beneficial initiatives, recognizing outstanding employer support, increasing awareness of applicable laws and policies, resolving potential conflicts between employers and their service members, and acting as the employers’ principal advocate within DoD. Paramount to ESGR's mission is encouraging employment of Guardsmen and Reservists who bring integrity, global perspective and proven leadership to the civilian workforce.